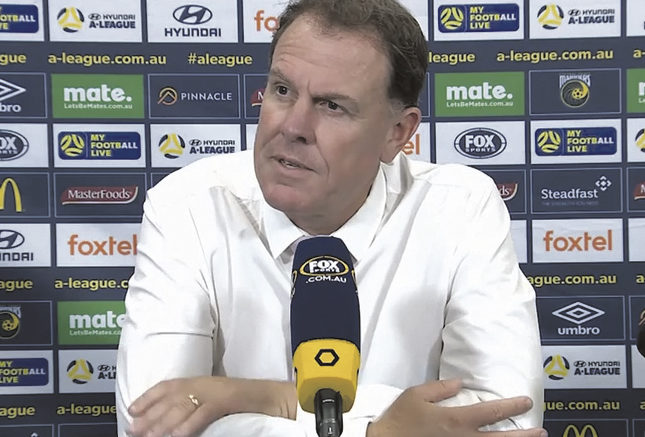 Central Coast Mariners’ Head Coach, Alen Stajcic, had words of reassurance for the faithful ahead of his one year anniversary at the beleaguered club.

“Everyone needs to know that we’re in for the fight, we’re in to be resilient, we’re not going to back down, we’re going to fight for every moment, every game, every minute,” Stajcic said.
“That competitiveness, the heart and spirit, the fans possibly thought that we lacked a little bit of that in Round 19, but I can assure everyone that we’re doing everything that we possibly can every week,” he said.
It is no secret that the Mariners have been on hard times over the past few seasons, with the club a revolving door for players and head coaches in particular, with their only consistency seemingly being the A-League wooden spooners, a title they’ve held for the past four seasons and seem destined to hold onto this year if they don’t find a way to close the five point gap between them and 11th placed Newcastle Jets.
With six games left in the season at the time of writing, it’s certainly doable if the Mariners find their form, but they are on a nine game losing streak.
Faith in the club’s decision makers has been hard to come by since the slow, ugly and very public demise of former Head Coach, Mike Mulvey, which saw players turn on coach and vice versa in a PR mess the club was hoping Stajcic’s breath of fresh air appointment would sweep under the rug of fans’ consciousness.
For the most part he succeeded.
At the start of the season, things seemed hopeful.
The club had a mix of old favourites, international talent and young up and comers in its stable, and even the world’s fastest man wanted to be in on the action.
There were admissions that things hadn’t been working and a new future proofing approach was talked up.
The Mariners even secured their first win of the season early on in Round 4, but wins have been few and far between since then, with some fans questioning if it was just more of the same at the club.
Stajcic said that while the immediate goal of short term success is important to him and his coaching staff, their long term approach is focused on ensuring the ongoing endurance and resilience of the club.
“We’ve made a deliberate strategy to really turn this club around and future proof it.
“I don’t think it’s been done for seven or eight years at this club, where there is a good generation of young kids that come through and get the opportunity to be in the first team, train with the first team, and even get some first team experience,” Stajcic said.
“That was probably the success of this club in the early days.
“So many young kids had the opportunity to come up here and ended up being great Mariners’ players, Socceroos and playing overseas.
“We’re future proofing the team to give us a good grounding and a good foundation to build on in the future, so we don’t always have to rely on the vicious cycle that’s happened here over the past few seasons, where we just regurgitate and recycle players,” he said.
“Rather, we’ve got our own to build on, and a foundation that we have as a steady supply into the first team to give us good success and sustainability and consistency moving forward,” he added.
As that strategy for the future takes shape, results in the present remain central to the fanbase and to the club as a whole.
Acknowledging frustrations felt by fans over recent weeks, Stajcic said he is dedicated to keeping the loyalty of the Mariners’ fanbase.
“I’ve been here for one year, Mariners fans have been here for 15, so they don’t want to hear that it’s going to be better in two years or three years time.
“They want success, and they want to have a team that they’re proud of and it’s our job to ensure that they can be proud of their team.” he said.