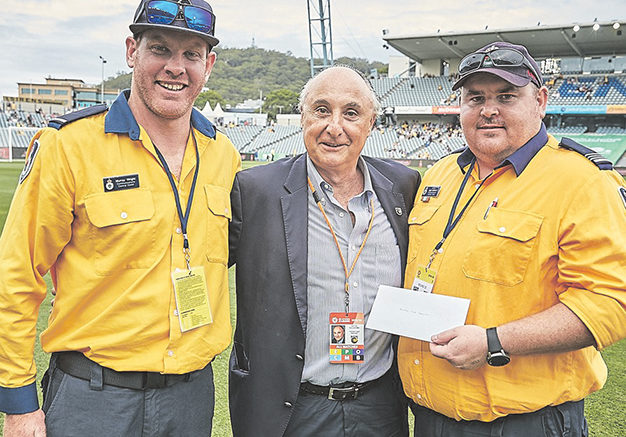 Almost $30,000 raised during the Central Coast Mariners Round 6 and Round 7 home games will be used to purchase new equipment for the NSW Rural Fire Service (RFS) Central Coast Communications Brigade, to assist them in their invaluable efforts to protect the community.

The Mariners donated $2 from every ticket sold at the two games.
In addition, proceeds from auctioning off Matt Simon’s infamous ripped jersey from Round 14, as well as other generous donations from Central Coast fans, all contributed to the Mariners’ donation to the Brigade.

With the money raised, the local Brigade will be able to purchase items such as a smart briefing screen, tablets and mounting units, new radios and new portable repeater batteries.

These will be important upgrades for our local volunteer firefighters.
As in the case of the smart briefing screen, this will provide a real time map of fire locations, replacing a service previously undertaken on printed paper maps.

These paper maps could be a couple of hours old once in the field, a period in which a fire could have moved large distances.

The new equipment will assist firefighters and support crews to more accurately monitor fires and weather conditions and aid with timely warnings to the community, according to NSW RFS Central Coast Communications Brigade Supervisor, Murray Wright.

“The fires this year have been especially bad and they have had a significant impact on the community,” he said.

“This equipment puts us one step ahead of future fires and provides real time information to the crews on the ground.

“What the Mariners have done for our brigade in fundraising for this equipment, we wouldn’t have been able to do without them, and we do thank them very much,” he continued.
“It’s been quite a relentless season, first fires and then local floods and storm work.
“We’ve been out on the ground since the last home game, so haven’t had a proper chance to catch up on our New Year’s Eve celebrations but hopefully soon,” Wright said.
“I’m really proud of everybody at the club and grateful to our fans for lending their support and donating to such a worthy cause,” said Anton Tagliaferro, the Mariners’ Co-Chairman.
“We are all very aware of, and extremely grateful to, the NSW Rural Fire Service for the extraordinary efforts made to protect our community’s homes during the recent fires.
“Our brave firefighters deserve as much recognition and support as we can offer,” he added.