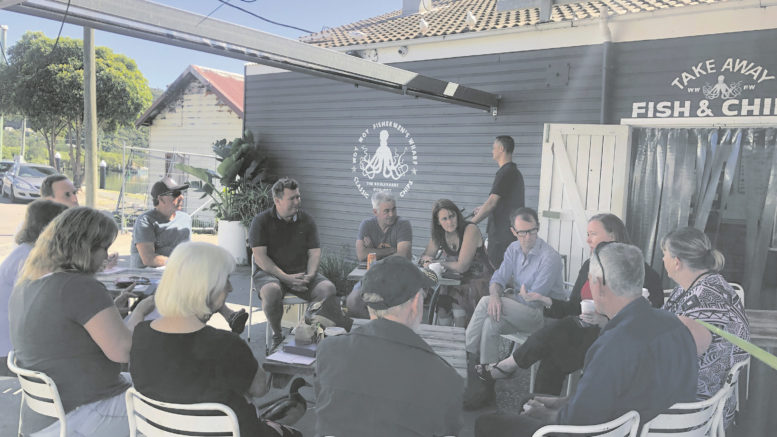 Commercial fishing operators working across the Central Coast are struggling to stay afloat in the wake of the State Government reforms to the industry.

They met at Woy Woy, in the week ending March 13, with Shadow Minister for Primary Industries, Jenny Aitchison, Member for Gosford, Liesl Tesch, and Member for The Entrance, David Mehan.
They wanted to address the “significant reduction in fishing vessels over the years which has led to a massive reduction of locally caught seafood”, according to one fisherman.
Aitchison said the local fishing industry was in chaos, four years into the industry restructure by the NSW Government.
“Recent announcements impacting commercial fishers is a slap in the face for the industry and shows how out of touch the government is with its day to day challenges,” she said.
“In the meeting with fishers, it emerged that they and many of their industry colleagues are struggling to stay afloat.”
Aitchison said the government announcement that it would waive the second instalment of commercial fishing management fees came far too late.
“It came nearly a week after the payment deadline and a month after the Labor Opposition called for the waiver, without any provision for refunds to provide cashflow assistance for those who had paid,” she said.
“The second announcement was for a review process to seek feedback on commercial fishing regulations, with a view to imposing more changes on the industry, under the guise of removing redundant and inefficient regulations.
“Commercial fishers continue to be severely impacted by the NSW Government’s disastrous Business Adjustment Program reforms implemented in May, 2016.
“The long promised review of the socioeconomic impacts of the program, the Barclay Review, was due in December, 2019, but still has not been released.
“They must release the Review before they embark on yet another round of change.”
Tesch said there hasn’t been any community consultation and the concerns of local fishers have not been heard.
“Our people are hurting and other people from other waterways are being allowed to come and fish in our waterways,” she said.
Mehan said family livelihoods were being put at risk.
Secretary of Wild Caught Fishers Coalition, Mary Howard, said mesh fishers were suffering through a restriction on the number of days they could work.
“They are trying to cope with working on limited days and they have to balance that with weather conditions and species movement,” she said.
“It doesn’t always work out comfortably and affects their ability to actually be viable.
“The ability to transfer quotas across the state for mud crab fishers was meant to make the industry more viable, but it has had the opposite effect.
“As a result of the reforms, mesh fishers can now keep crabs caught in their nets, whereas previously they couldn’t, and this is impacting crab fishers.
“Changes to the ‘shares’ system for prawn trawl fishers means they have had to buy more shares to keep their business going.
“These moves have forced many fishermen out of the industry and put others in additional debt.
“It has impacted many families on the Central Coast and elsewhere,” Howard said.
Dane Van Der Neut of Wyoming has been fishing the waters off Patonga, in Broken Bay and the Hawkesbury River, for the past 12 years.
He and his father, Tom, of Woy Woy, who has been fishing those waters for 45 years, operate a family business with two trawlers.
They have been supplying fresh, locally caught, seafood to various places around the local area as well as the Sydney market.
“The government has destroyed an industry that feeds a nation,” he said.
“One example is, that before the reforms, a commercial fisherman was able to work 365 days, but now it’s restricted to 63 days, and if you want to work more days, you have to buy back into the industry through the shares system for a job that you were already doing.
“The reforms did reduce businesses because some couldn’t afford to buy shares at inflated prices from people in the know, who bought shares before the reforms were introduced.
“Some of the share prices were just ridiculous.
“For example, meshing was something like $80,000 for just enough shares to go meshing for 60 days.
“Even though the government touted it as ‘look how good we’ve made the industry’, all it did was put quotas for certain species, like mud crabs and lobster, into single hands and create monopolies.
“I was squeezed into one fishery species, which limits your ability to create an income through different seasons.
“It made me go and get other employment because I couldn’t diversify anymore, so we had to put all our eggs in one basket, which meant we just had the prawn trawling.
“The government wanted to change a multi species, multi method industry into a single species, single method industry, which just doesn’t work.
“The reforms, the government said, were to streamline the industry and to make it more valuable, more profitable and viable, but it has done the opposite.
“The government is not listening when commercial fishers continually warn that this is a mistake and it has put the whole industry in a very precarious economic situation.”
But Parliamentary Secretary for the Central Coast and Member for Terrigal, Adam Crouch, said the government had implemented “essential reform in the commercial fishing industry to ensure we can effectively manage fish resources, as well as having a viable and sustainable fishing industry into the future.
“By linking commercial fishery shares to catch or effort, these reforms have actually given meaning and value to the shares,” Crouch said.
“During the course of reforms, fishers were given a number of choices, including to consolidate, sell or expand.
“If fishers wanted to sell their shares, they were able to do so and received a $20,000 payment.
“For some, this was their retirement fund after years of waiting for the reforms to come.
“The NSW Government is also providing over $1M in fee relief for fishers impacted by the recent drought, fires and flooding”.
Crouch said the socioeconomic review was currently underway and when the report is finalised, it will be considered by the NSW Government.