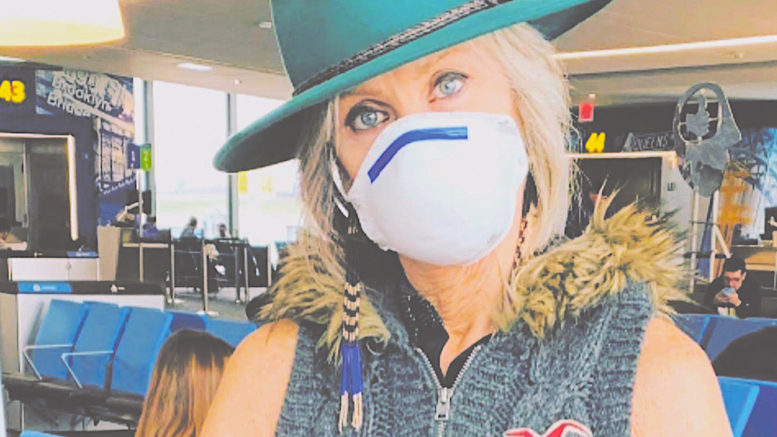 As Prime Minister Scott Morrison urged all Australians abroad to head for home, Central Coast residents all over the globe were faced with cutting holidays short and getting home as best they could, often under trying circumstances.

For Michelle Kinnane of Pearl Beach, a trip to visit her new grandson in New York turned into a nightmare.

“My son has been living in New York for six or seven years and runs a company in Manhattan,” Kinnane said.

“With he and his wife expecting a bay, I booked ages ago to take a trip there at the beginnning of March.

“When I flew out on March 9, the situation wasn’t too bad, but the day after I landed, things started to go haywire.

“New York quickly became a ghost town and my son had to close down his office, and every day, the news became more stressful.

“As it became clear that I needed to return home, my son and his wife, both Australians, had to make the decision whether to stay in New York or to come home with me.

“There was a lot to consider with a company and a dog to think about, but with the state of medical support in the States, they decided that they needed to come back to Australia with me.

“I was glad I was there, because without me to help with the baby and meals, they couldn’t have organised all they needed to in three or four days.

“Then came news that the borders would soon close.

“We didn’t know if it was real news or fake news, but I felt very panicked.

“As soon as the baby’s passport came through, we were on a plane on March 19.

“The flight home was full of Australians leaving everything behind, like my son did.

“It was very distressing once we landed, because not everyone had got the message that only Australian residents would be allowed back in, and people were being forced to go back to the countries they had come from.

“When we arrived back in Australia on March 21, because of the time difference, it looked like everything was going on as normal and that disturbed us, but of course, things have changed again since then.”

Kinnane is now in isolation at home, with son Adam, daughter in law, Leilaini, and grandson River is in isolation in a separate Pearl Beach home.

“We keep in contact via video – I am just so thrilled they are here,” Kinnane said.

“It’s strange to think that if things had been normal, I would have been in Miami now and wouldn’t have been back for another week.”

Leaving on March 4 for a month-long trip, the pair had “no second thoughts” about flying out.

“We knew there was a virus, but at that stage it seemed like a bad flu which was largely restricted to China,” Cummings said.

“We thought South America would be safe.”

The pair spent the first 10 days in Bolivia, enjoying the local sights and expecting to cross into Argentina and then go on to Buenos Aires, Rio, and Uruguay for a home stay.

But on March 15 at 5am, they got the news that their tour was cancelling the Buenos Aires trip, with border crossings an unknown, and were given the choice to abandon the tour, which they decided to do.

“We were the only two to leave the tour, but we knew that there was an airport in Uyuni, where we were at the time.

“It was a known quantity and we heard that flights in and out of Argentina were already being cancelled,” Cummings said.

With difficulty getting on to airline LATAM, the couple had their son book and pay for a flight for them to La Paz, where they stayed for four days before finally flying home.

“The first couple of days in La Paz were vibrant,” Cummings said.

“On the Monday morning, we took the cable car to the airline office and they were great and were able to change our flights home to the Thursday.

“The streets were alive with colour and movement, but on the Tuesday night, we noticed everyone packing up early.

“When we got back to the hotel, it was blocked off with a grille, and we had trouble getting back in.

“We hadn’t realised that a curfew had been introduced that day.

“On Wednesday, the streets were quiet and we were sitting in our hotel room by 5pm, with the TV on to provide a bit of background noise.”

On Thursday, March 19, the couple flew out of La Paz for Santiago, where they had a 13 hour layover before their flight to Australia left.

“We were tense the whole time that we were laid over,” Cummings said.

“Some flights were cancelled, and we later heard that two flights after ours were also cancelled.

“We were so relieved to get on board.”

The couple finally got home to Sydney on March 21.

“We stayed in touch with others on our tour from various countries and discovered that they were also affected by the lockdowns, but they have all managed to get home safely, thank goodness.”

Now in isolation at their Umina home, the couple is relieved to be back on Australian soil.

“We are grateful we had 10 days in Bolivia and managed to experience the Bolivian Salt Flats and the marvellous culture, and it was just gorgeous, but sitting at home is a great place to be,” Cummings said.

Crackdown on student sick days could have unintended consequences