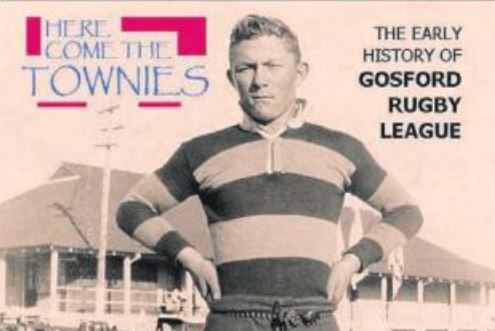 The Early History of Gosford Rugby League, The Townies.

One of the positive aspects of the COVID-19 Lockdown is the opportunities it provides to reflect on long forgotten times and the spirit of our forebears who faced similar challenges a whole century ago. We hope you enjoy this extract from Andrew Stark.

No sooner had hostilities on northern battlefields met their ultimate and merciful cessation, than a horrific influenza pandemic did begin its pneumonic sweep across the globe.

The beleaguered peoples of the world simply couldn’t take a trick, for the Spanish flu of 1918/19 is claimed to have killed more people than the war it so cruelly followed.
Australia’s mortality rate inverted this trend.
However, a death toll of ten thousand left an already grieving nation wondering just what calamity may befall it next.
The epidemiology suggests that during the final stages of this deadly disease, the infection did deny a patient’s lungs any oxygen, causing the victim to turn blue, purple or black before their ultimate expiration.
The impact upon the Brisbane Water district was thankfully milder than in many other, less fortunate, regions.
The illness contributed to a dozen local deaths during the winter of 1919.
Gosford Football Club (GFC) President and popular Mann Street pharmacist, Stan Eggins, was run off his feet during the height of the infection and he was directly involved in issuing public health advice to a somewhat panicked populace.
His preventative tips for staving off the flu reached as far and wide as Queensland’s Maryborough Chronicle.
A sage newspaper item appeared in which the Gosford chemist advised the public to: “Take every other morning for an adult, ten drops of pure rectified spirits of turps in a spoonful of fresh milk.”
One can only speculate as to whether it was Eggins’ turps flavoured milk which spared the good folk of Gosford the very worst of the disease.
What is known however, is that despite the seriousness of a raging pandemic, the local chemist did dutifully shut his drug dispensary between one and six each Saturday afternoon to attend Gosford football matches.
The 1919 season presents as a watershed year in the history of Gosford football.
For the very first time, the GFC did compete in a locally sanctioned competition and had a smidgen of luck fallen their way, the team may well have ended the season clutching the trophy.
The silverware had been donated by the proprietor of Erina’s Woodport Sawmill, Mr Alexander Charles Frew, whose shiny cup was to be presented to the team finishing ahead of the pack after the series of home and away fixtures was complete.
A separate League Trophy competition was also constructed, and was to be played at the conclusion of the Frew Cup.
The League Trophies were individual medals given to players of the winning team.
A two-week knockout series was fought out by the top four teams; the rankings determined by the completed Frew Cup competition ladder.
The structure of the season has a clear correlation to today’s home and away rounds which are followed by a semi-final series.
In 1919, the minor premiers were deemed to have won the competition, while the winners of the ensuing challenge series were crowned the knockout champions.
The weighted importance of these two competitions was a direct inversion of the contemporary emphasis.
Winning the first past the post, minor premiership, was the major achievement in 1919, as it is today in most World football (soccer) competitions.
The knockout series which followed, and which led to a season’s grand final, was deemed to be of lesser importance.

Six teams entered the 1919 Frew Cup, which was once again played under the auspices of the Wyong & District Rugby Football League (W&DRFL).
The Gosford Football Club was quick to set in place the founding principle of rugby league.
During the Club’s pre-season meeting, held in early May, it was decided that a weekly levy of one shilling was to be imposed upon each member, creating an in-house insurance scheme from which injured players would subsequently be supported.
A further item of business struck a most progressive tone, as players were informed that a system of regular training is to be introduced under the direction of the selection committee.
Gosford’s 1919 season would become a tale of two distinct halves.
At the midpoint of their Frew Cup campaign, Gosford boasted just the single win from their opening five games.
Their lone success being an 11-5 victory against competition easy beats Yarramalong, who would become so disheartened by their early efforts, that they forfeited the entire second half of the season.
In complete contrast to their pre-July fare, Gosford became the form team of late winter and remained undefeated throughout the return fixtures.
An 8-0 win against the previously undefeated Wyong, was followed by victories over Erina 5-3, Ourimbah 20-2, and a final, comprehensive 15-0 away win over the eventual premiers, Jilliby.
Peace Day did push the second last round of the football season back a week, as celebrations overtook Gosford and the entire nation on July 19th.
Decorated floats colourfully wended their down Mann Street en route to an afternoon of activities in the park.
The local school children put together a series of exhibits symbolising Peace, Prosperity and the British Empire, and a full three minutes of silence was observed to solemnly commemorate those who had fallen during the war.
Two days before Peace Day, the Jilliby team had been rocked by the news that one of their players, 25-year-old Richard Sheldon, had lost his battle with influenza.
Sheldon was a recently returned serviceman who’d relocated to the district to try his hand at farming and was one of three local influenza deaths recorded on the same day.
On the weekend prior to Sheldon’s passing, the Jilliby team had struggled so greatly with an outbreak of the infection within their ranks, that their scheduled fixture against Erina needed to be postponed until later in the season.
Wearing the royal blue jerseys made famous by Newtown in the Sydney premiership, Jilliby would become the Cinderella story of 1919.
The small-town team was crowned champions of the district despite Jilliby never having previously possessed a football team.
The physically lightweight thirteen from the Dooralong Valley could just as easily have been denied their triumph however, as they were controversially allowed to keep first-round competition points accrued from an 11-5 win over Erina.
It was a game in which W&DRFL delegates found that Jilliby had played a man in defiance of rule 21.
While no direct detail is given as to what this rule may have consisted of, an official sanction was in place that required any team found to have breached the rule, be required to automatically forfeit any points they may have accrued from said game.
The 1919 season was the first in which local players were required to be registered.
All club secretaries had been instructed to make available a full list of their registered players prior to kick-off.
One strongly suspects that Jilliby had played an unregistered player during this first-round victory over Erina, hence the rule 21 breach.
A late May meeting of the competition’s executive committee somewhat benevolently decided to allow Jilliby to keep their points.
With half a dozen members of the Smith family in their side, the athletically agile Jilliby team carried forth to claim the Trophy Cup medals, defeating Wyong 3-2 in the final.