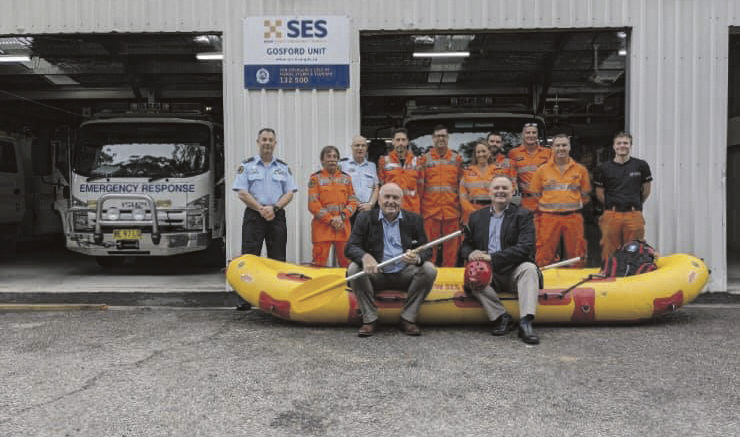 Minister for Emergency Services, David Elliott, and Parliamentary Secretary for the Central Coast and Member for Terrigal, Adam Crouch, with members of Gosford SES and a craft similar to the one the grant will help provide

In the wake of severe flooding in the region early in February, Central Coast SES will receive $10,000 from the State Government to buy an ArkAngel Flood Rescue inflatable boat to add to its fleet.

Wyong and Gosford SES have each received $5000.

The grant was announced recently by Minister for Emergency Services, David Elliott, and Parliamentary Secretary for the Central Coast and Member for Terrigal, Adam Crouch.

Crouch said the funding could not have come at a better time.

Elliott said: “We’re committed to providing our SES volunteers with the best possible equipment and amenities so they can get on with the job they do best – saving lives,” he said.

A spokesperson for Gosford SES said the unit currently had one Arkangel rescue raft, which was used in many of the rescues and evacuations during the recent storm event.

“The additional rescue raft will ensure that during major events like the recent February storms, the Central Coast community is better covered with multiple rescue operators able to standby with increased rescue capabilities.

“In January this year we had two more volunteers complete their training for ‘in water’ flood rescues.

“Flood Rescue is a major responsibility of the NSW SES and Gosford Unit is well prepared to support our local community and the wider NSW community.”