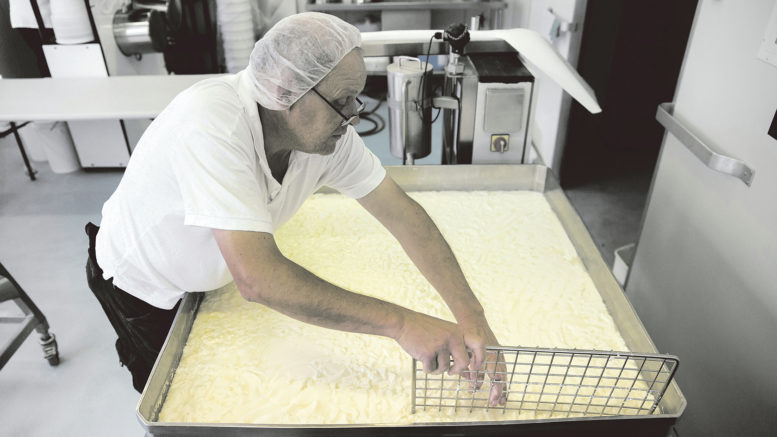 Russell Parsons at work in the factory

The Central Coast’s Little Creek Cheese has taken out eight awards at the 2020 Sydney Royal Cheese and Dairy Produce Show as part of the Royal Easter Show.

Sue Parsons, who owns and operates the business with husband Russell and son Alex Nelson, said the family was “thrilled” with the result.
“There’s no way you could do all the shows associated with the Easter Show at one time, so different things are judged throughout the year,” Parsons said.

“We actually had to nominate our entries in October last year.”
The cheese factory, which operates out of the Wyong Milk Factory, picked up a total of eight awards, 1 gold, 2 silver and 5 bronze, in the competitive event, which sees entries from every State.
The family owned cheese factory has been operating for nine years.
“It started as a hobby,” Parsons said.
“We were sitting on the porch one day with a cheeseboard and wine and I asked Russell how cheese was made.

“He didn’t know and a couple of weeks later he pulled out a cheesemaking kit.
“The three of us started doing it as a hobby, making cheese on the weekends, and then we started taking it along to parties, and eventually we decided to open our own factory.
“We found at that time that if you wanted to see a cheese factory you had to go to the Hunter Valley, so Russell and I gave up our jobs at Coles and started looking for venues.
“It was time for a cheese change, but it took another year before we were ready to open.

“It took us a while to find a suitable location, but when a real estate agent showed us the Milk Factory, we fell in love with it.”
Parsons said the three were constantly experimenting with new flavours.
“One of our customers asked if we made Greek pasta cheese, so we googled it, tweaked it, and now we make it,” she said.
“We like to experiment so we try a lot of different flavours and see what works.

“Of course we have failures, but we have more successes.
“We like to enter competitions to see we are still in the ballpark.
“They give you an idea how you compare with other factories and products which are out there.”
Parsons said he was still “amazed” when locals visit us at the factory and say they didn’t know it was there after nine years of operation.
“This is the way cheese should taste, we make it with passion and love,” he said.