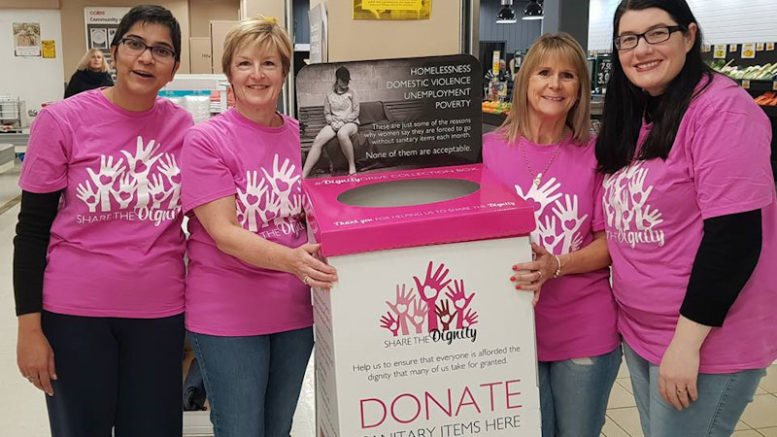 Share the Dignity is s women’s charity, aiming to give women the dignity they deserve. Image: sharethedignity.com.au

Woolworths stores at Erina, Gosford and Lisarow are calling on residents to get behind Share the Dignity’s annual Dignity Drive in March to support the fight to end period poverty for women in need across the region.

Residents can help make a difference by donating a sanitary item via the Dignity Drive boxes located in each of the stores.
In 2019, the charity collected nearly 38,000 sanitary products in the August dignity drive across Woolworths stores in NSW.
These donations were distributed to girls and women who cannot afford to buy sanitary items each month.
Woolworths Erina, Gosford and Lisarow Group Manager, Martin Allison, said it was heart warming to see how enthusiastic shoppers were to help support local women in need.
“We hope that our customers will get behind Share the Dignity again and help us raise vital supplies for girls and women experiencing poverty, homelessness and domestic violence,” he said.
Chief Executive Officer of Share the Dignity, Deborah Ferguson, said the number of vulnerable women in Australia was growing.
“We are working towards an Australia where women and girls will no longer be forced to use wadded up toilet paper or socks to manage their periods, which is a sad reality for too many girls and women today,” she said.
“Share the Dignity encourages you to think, ‘one for me, one for her’, because while it may seem like a small gesture, we know small dignities make a big difference.”
Funds committed by Woolworths from the sales of sanitary items in stores across the country over the past year have been used to purchase Dignity Vending Machines.
Known as Pinkboxes, the machines dispense free period packs to women and girls supported by domestic violence services, homelessness hubs and schools.

CCRI on track to open in 12 months