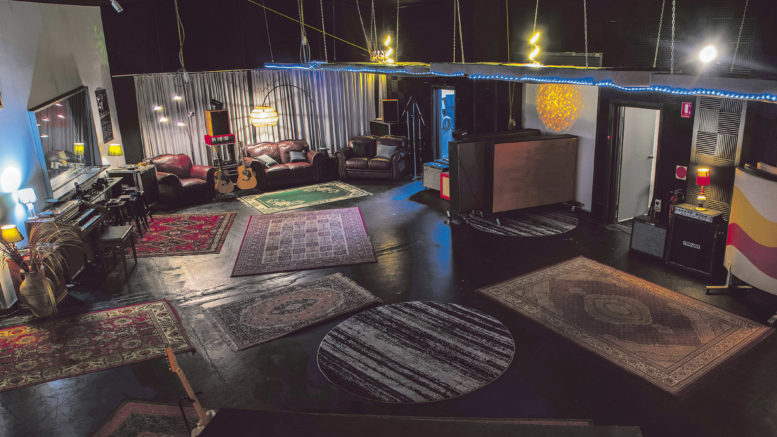 One of the country’s most prolific music studios has relocated to the Central Coast.

Tucked away in an unassuming corner of West Gosford’s business district, Damien Gerard Studios (DGS) has worked with some of the biggest bands to ever come out of Australia, with the likes of the Divinyls, INXS, Icehouse, Silverchair and the Hoodoo Gurus all having graced the studio over the years.

The studio started in an old wool factory at Ultimo in the 80’s.
Back then it was a demo studio where artists could hideaway to write and rehearse before heading overseas to record.
A move to Balmain in early 2000 saw it become a full service studio, with the brand growing a reputation as one of the most prestigious studios in the country.

However, as high rises began springing up around it and with the building the studio was located in on the cusp of being rezoned, Studio Manager, Marshall Cullen, decided it was time to pull the pin on Balmain and put down roots elsewhere.
Having lived at Umina Beach for the past 15 years, Cullen was excited at the prospect of setting up on the Coast and turned his attention to finding the right space.

Enter Jason Stenning. The Founder and Managing Director of personal protection equipment manufacturing company, Industree Group, a chance meeting between the two saw them bond over their dual lifelong passions for music and the vision for DGS West Gosford took shape.
The studio officially opened in October 2019 and since then Cullen and Stenning have been quietly getting on with the job of getting the word out, with some big names having already made a trip to the Coast to record.
The Church’s Steve Kilbey was their first client.

He loved the space so much that not long after he was done with his solo project, he had The Church come in to record.
For the unilluminated, The Church are one of Australia’s most successful alternative rock bands who shot to international stardom in the 80s for their distinct sound that blended psychedelic beats with ethereal guitar.
While some of the luster has worn off, the ARIA Hall of Famers still retain a cult like following around the globe and released their 25th studio album in 2017, with rumours their 26th could have been on the agenda at DGS.
According to Cullen, The Church had been regulars at the Balmain space (it used to be their studio before it changed hands) and they loved the new look DGS.

The space boasts arguably one of the largest live rooms in existence, a trove of amps, mics, instruments, gear and enhancements for the talent to experiment with, a world class floating control room and enough vintage Persian rugs that the joint could double as a Carpet Court.
The pair are banking on the sheer size of the studio and all those bells and whistles to mitigate any doubts artists might have about the decision to take DGS out of Sydney.
“Most studios just aren’t this big so we’re unique in what we can offer,” Cullen said.
“Our live room especially is huge.
“When The Church were here their drummer was able to set up two full drumkits and move between them for different takes and that’s just not possible in a smaller space,” he added.
Getting the expansive space ready didn’t come without its challenges though, with sound proofing and leveling taking three months to perfect.
“It took a lot of sweat collateral to get the space ready and we’ll probably be tweaking it for the next 18 months or so, but the studio can cater to pretty much anything,” Stenning said.
“We could put anything from a full-blown orchestra to Metallica in here and with the tech we’ve got we’d be able to produce a world class recording.
“We’ve got the infrastructure, the skills and the equipment, so in a nutshell it’s a pretty diverse offering.
“It’s a huge space and Marshall and our Chief Audio Engineer, Andrew Beck, are very welcoming and easy to work with, and everyone that’s come has just sung their praises and said how much fun they had during the process,” Stenning said.
And for the team at DGS that’s what it’s all about.
“We want artists to walk away happy.
“When they leave, we want them going out thinking they couldn’t have done it any better,” Stenning said.
That positive feedback has helped them shake off any misgivings they had about going regional.
“There’s nothing like DGS on the Coast.
“There is the Grove Studios at Somersby, but we do different things so we’re feeling pretty confident,” Cullen said.
Stenning conceded it wasn’t common for studios to pop up outside of the big cities but said the Coast was becoming more aligned with Sydney and that he didn’t feel DGS had taken a big risk in coming to West Gosford.
“Honestly, you hear more about studios closing down than opening.
“This is an expensive industry that requires highly skilled individuals to come together.
“It’s not easy.
“Finding the right people and getting them into the right role is a bit like finding hens teeth, but Marshall and Andy are two of the best and I fully back them,” Stenning said.
The pair said part of their plan to ensure DGS thrived on the Coast was making an impact as a good corporate citizen, with plans to provide opportunities for local musicians and young people looking to break into the production side of the industry in the works.
“Supporting aspiring artists and producers looking to get into the industry is really important to us.
“We’ve been a longtime sponsor of the national Youth Rock Competition and have been offering recording sessions to the winner of the University of Newcastle’s Battle of the Bands for a while now,” Cullen said.
Cullen said the team were currently working on getting an internship program for audio engineers up and running and had been in talks with ABC Central Coast and the Central Coast Conservatorium about some new initiatives for local talent.
Stenning said opportunities for networking, scholarships and sponsorships would also be looked at later down the track to help local artists get a foot in the door.
Having now settled into life at West Gosford Cullen said DGS was now focusing on building its momentum, meaning getting an array of artists through the door and into the studio.
And he’s hinted there’ll be some more big names hitting the Coast to record this year.
“Steve Kilbey will be back and the Hoodoo Gurus will be popping in.
“There’s some other big names that I can’t divulge just yet, but just know our list is long and pretty illustrious,” he said.