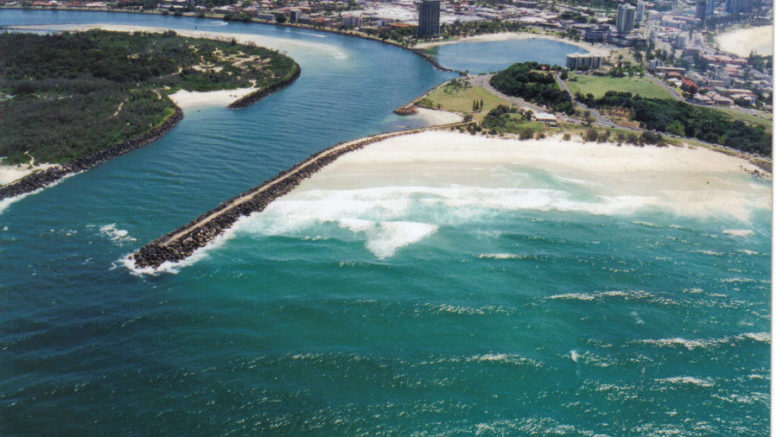 The mouth of the Tweed river, and duranbah beach from the air.

[Forum]With dredging of Tuggerah Lakes being discussed, I felt that there was a more cost effective way as a permanent solution to assist in the elimination of the sifting and stagnant weed problem within the lakes.

As I am involved in engineering, a satisfactory solution has been observed on many break walls on the east coast of Australia, and once fully operational, nature looks after the rest.

The solution would be less expensive, opposed to a huge dredging program that has to be done regularly over the years.

Construct a break wall once and it’s there for life.

There are many examples of the sand building on the northern side, and with the age of drones to observe this natural solution in operation up and down the coast, some examples are the Swansea Channel and Mawson’s illegal break wall south of Caves Beach, which was supposed to load ships when completed, but Mawson overlooked one small detail of getting permission, but the break wall is still there.

There is always opposition to any suggestion that might see a satisfactory result.

Why, because some people are Luddites.

This is a fantastic lake system but desperately needs major attention, not a Luddite approach.

In my research, I spoke to many people around the Tuggerah Lakes and the over-riding fact that prawns were once caught around little beaches, but alas now, weed is so thick that there’s no activity around the lake shore anymore.

Some people project the argument that an open channel would let in sharks to the lake system.

For a start, the lake system is too shallow for any real sailing that could warrant shark/human interaction, but Lake Macquarie has not had a major problem with sharks taking people.

Why, because locals and holiday makers use common sense when using watercraft on the lake.

Sure, there might be discussion about erosion eating away the banks with a faster flowing current, but Swansea Channel appears to have had no real problem over the last 100 years, so another argument is dealt with.

Another argument was put up about the piers of The Entrance Rd Bridge.

My answer to that is that if dredging takes place and there is a greater volume of water flowing under and around the bridge piers, would that have the same effect as an open channel?

A bridge pylon rock buffer around the piers would deflect the water flow away from the base of each pier, problem solved.

No matter what problem is encountered there is always a solution and the trick is to solve it once, not every 10 years to redo it again and again, with increasing costs every time.

State Government and Municipal Councils need to decide if this project is to proceed.

Bear in mind every river outlet that feeds into the ocean has a similar problem.

There are Universities that deal with these types of scenarios and they may be of assistance by modelling and typical tide information to assist.

On the recent heavy rains in February 2020, it was reported that residents were observed shoveling sand to open the channel and how high tide won’t hold up water to cause flooding around the lake shore.

Another, but very expensive, project that I feel should be investigated, is to have a series of break walls in the opening of Lake Munmorah to the ocean, forming a continual flow of tidal water to assist in the deepening of this lake and removal of weed.

This undertaking involves road bridges North of the Entrance, a very costly project.

First things first, the entrance to Tuggerah Lakes at The Entrance is an urgent priority for cleaning up the lake system.

I have been casually doing research over the last 40 years to gauge people’s response, but in 2019/2020, a positive reaction was achieved, with residents and visitors all around the lake showing major interest.

From my holidays in the 1960’s around The Entrance area, this area was huge, then the motorcar became more available and many younger people and families headed north.

Being close to Sydney, many families are returning to The Entrance area, but of the people I talked to, most felt that the township needs a huge facelift and the weeded and sanded waterways are an excellent place to start.

While on holidays in Florida, USA, a prominent person I interviewed explained that the Art Deco was a way to raise the town’s image without spending millions of dollars.

Maybe the Council could look at revitalising The Entrance along these lines.

Those burnt out shops in the main street may be a crime scene, but It needs fixing and quickly.

I always tell my children and grandchildren that in life, you lead by example, and that applies to Governments, both State and Federal, filtering down to councils.

The example, start the ball rolling on Tuggerah Lakes and surrounding townships, the future is in your court.

This applies to all people of all political persuasions.

Please do not fall into the latter group.

Quite a show at Wyong chambers