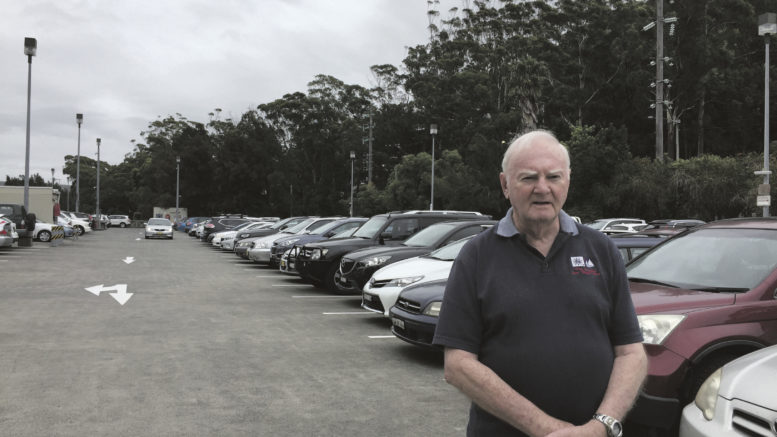 With no word yet on a pledge made almost 12 months ago in the lead-up to the Federal Election of $30M for additional car parking at Gosford Railway Station, Central Coast Commuters’ Association is “disappointed and frustrated that it is taking so long to formulate a plan”.

Association Vice President, Eddie Ellis, said members would like to see more levels added to the existing commuter carpark in Showground Rd.
“It can be increased to a height of 24.7 metres, which is approximately nine levels,” Ellis said.
“In 2013, there was a quote of $7M to reinforce and build one level.
“I had an architect look at the site some time ago and he suggested building new levels in steel, which need less reinforcing.
“We would like to see the structure reinforced to allow for future expansion, and to allow for as many levels as possible.”
Member for Robertson, Lucy Wicks, confirmed the Government’s $30M commitment for car spaces at Gosford, along with $5M for spaces at Woy Woy Railway Station.
“Scoping and development activities are underway and will determine locations and construction timeframes in due course,” Wicks said.
“I, like the majority of Central Coast residents, look forward to both projects getting underway.”
Ellis said a longer term parking solution could be found for both commuters and CBD workers with a partnership between the State Government and Central Coast Council.
“The State Government owns land directly opposite Gosford Station at the old Booth’s Motors site, where car parking is currently provided at ground level,” he said.
“The site, covering land on both sides of Keevers La, allows for 68 parking spaces.
“If 138 Faunce St was purchased or resumed, the available land would extend from Mann St to Watt St.
“All that is then needed is an adventurous architect.
“The Government and Central Coast Council could share the cost of building each level of parking.”
Ellis said that with the current proposal for a revamp of the adjacent Gateway Centre proposing a height of up to 33 storeys, the carpark could go equally as high.
“The bottom four levels could be shops or offices,” he said.
“Levels five upwards could be built over Keevers La, allowing for approximately 100 parking spaces per level.
“Then, perhaps in stages, 20 levels of parking could eventually be developed.
“A car lift could be provided to reach level 10 of the car parking, so drivers would not need to be traversing up to 19 ramps when eventually fully built.
“The top nine floors, when built, could be either offices or apartments.”
“This would take a lot of discussion and planning and would be developed in stages over many years.”

Commuters’ Association calls for a bipartisan approach on car parks