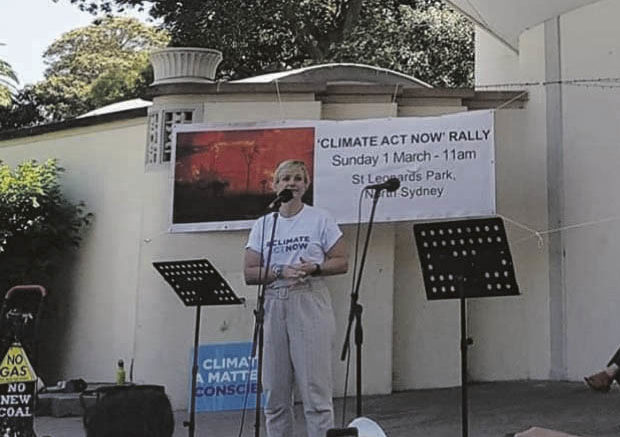 For the second time in under a month, a community rally will be held outside the West Gosford office of Member for Robertson, Lucy Wicks, calling for action on climate change.

The Central Coast Community Climate Act Now Alliance will hold a rally on March 15 at 10am in the lead up to debate on a climate change bill proposed by MP Zali Steggall and due for debate in Parliament on March 23.

Steggall will call for a conscience vote on the bill.
An Alliance spokesperson said members would call on Wicks to support the conscience vote to “take the political rhetoric out of the Climate change debate in Federal politics” and vote in favour of the bill.

The bill calls for a net zero emissions target by 2020, a carbon emissions budget and assessments every five years of national climate change risk.
“There are over 20 countries that already have put a similar framework in place,” the spokesperson said.

“Australia is fortunate to be able to learn from the debate and experience of other countries, including the United Kingdom, Germany, France, and New Zealand.

“The bill aims to ensure that Australia has a clear and positive national response to the challenges of climate change.

“That is what a large and growing majority of Australians call for, and what Australia needs.

“Our unprecedented early summer bushfires are a clear indication of the worst of those risks, and how they will affect some communities more than others.

“But there are also opportunities to prosper, given our enormous natural, human and financial wealth.

“To protect our economy and environment, Australia must have strong national plans to adapt to increasing impacts of climate change, to reduce and mitigate its risks and to leverage its opportunities.”

The spokesperson said the bill would ensure Australia has: a positive response to the challenges of climate change that is transparent and effective; national plans for adapting to a changing climate; national plans for reducing greenhouse gas emissions; transparent monitoring, reporting and accountability for national adaptation planning; and, emission reduction actions.

“The framework leaves national action in the hands of our elected Government, but mandates an effective process for national targets, actions and reporting.”