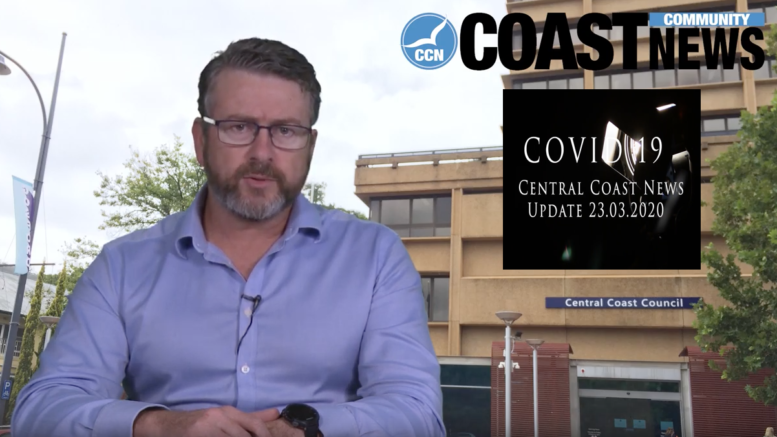 [March 23, 2020] This afternoon, we plan to cover four things – an update on the spread of the Virus in NSW and here on the Coast, we’ll hear from Council CEO, Gary Murphy on some important local announcements, we’ll provide an update on the latest ‘shut-down’ announcement by the State governments and we’ll try and give summary of new measures outlined in the Federal’s government second stimulus package.

Going forward we’ll be providing COVID-19 updates here on the website and via social media every 48 hours or more frequently if required.

All our other news is also now being made available online in real time.

But first, let’s update the numbers.

As of 9am this morning, an additional 136 cases of COVID-19 have been diagnosed in NSW in the prior 24 hours, bringing the total number of confirmed cases in the state to 669.

Schools will remain open for families that have no option but to send their children to school.

Keep in mind, there has also now been well over 53,000 cases tested and cleared.

On the Central Coast, Local Health District released a statement over the weekend that there are two more confirmed cases of COVID-19 on the coast.

Health staff continue daily wellness checks with all confirmed cases in the District who remain in isolation and are doing well.

OK, earlier today I spoke with Central Coast Council CEO, Gary Murphy, who had some important announcements to make – here’s what Gary had to say.

Specifically, all non-essential services that involve gatherings of people will be closed down from today – this includes pubs, clubs, restaurants, cafes, gyms and places of worship.

It does not include supermarkets, banks or public transport.

We’re told that NSW schools, at this stage, will remain open until the end of Term 1 on April 9, but Premier Gladys Berejeklian has called on parents to keep children home if they are able.

And we understand NSW has also now closed its border with other states.

On a happier note, while beaches have been closed in Sydney, the Council advised this morning that Central Coast beaches will remain open.

Let’s turn now to the second Federal Government stimulus package announced by Scott Morrison, which has been described as the biggest socio-economic intervention by government ever – or, as Scomo referred to it “a second round of economic life support”.

Let’s hear from David Abrahams what was in that package:

Thanks Ross, the package is estimated to be worth $66 billion and the key elements include the following:

And already, people are talking about a third stimulus package so we’ll keep you advised of that.