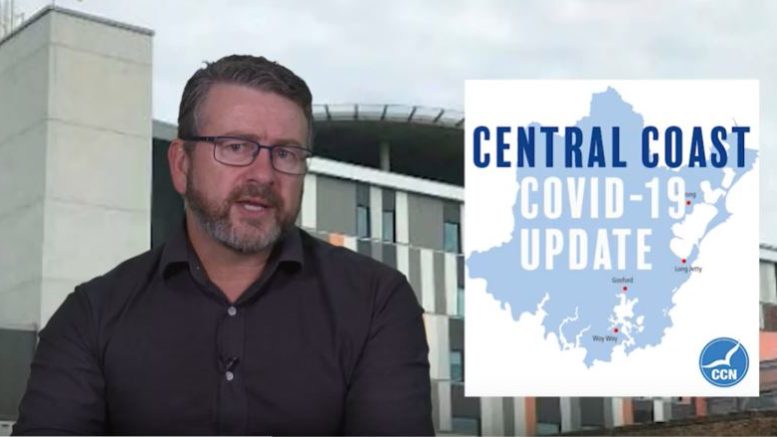 The number of confirmed COVID-19 cases on the Central Coast remains at two, unchanged from yesterday.

Across NSW, the number of confirmed cases jumped to 210, an increase of 39 from yesterday.

There are 1,428 cases under investigation and, once again, just to put that into context, there have been over 28,500 cases that have been tested and clear.

NSW Health COVID-19 assessment clinics are up and running across the state, including two on the central coast.

One is adjacent Gosford hospital at 75 Holden Street and its opening hours are 9am-6pm, Monday-Friday and 10am-4pm, Saturday-Sunday.

The other is at Wyong hospital Pacific Highway, Hamlyn Terrace and that clinic is open from 8:30am-5pm, 7 days.

NSW Health stresses that these clinics are for those most at risk with respiratory symptoms or fever, those returning from overseas or in contact with a COVID-19 case, those who have had contact with confirmed cases and also for health workers.

The Federal government today escalated its response to the crisis with Health Minister Greg Hunt saying the government will move to the next stage of telehealth services, including greater access for midwives and for people who have a relationship with a particular practice.

Mr Hunt also said he had met with the infection specialists at the Doherty Institute and work had begun on fast-tracking a COVID-19 vaccine and treatment.

He also said 230,000 new P2 masks have arrived in Australia today and will be shared with states, pathology providers and general practices.

Mr Hunt said advice on indoor gatherings and aged care homes from Australia’s chief health officers would be delivered to the national cabinet within 24 hours.

The measures could see restrictions placed on pubs, restaurants and cinemas for gatherings of more than 200 people.

The Health Minister said school closures had not been ruled out, but schools would remain open at this stage, noting that mass school closures would impact significantly on critical emergency service workers and on other health workers.

All three levels of government are progressively issuing official advice on how to deal with the emerging situation.

Firstly as you say the Federal Government has commenced its public education campaign with high level advice on preventative measures, procedures for citizens and communications points.  Key to these announcements are a series of publications Coronavisus resources that are available on the health department website. We’ve made those also available on our own website.

The federal government is also running the corona Health Direct hotline on 1800 020 080 for those concerned, Health Direct also run an extensive information website that can assist educating the public on symptoms and guide appropriate responses. Simply search Health Direct for that site.

NSW Health is coordinating the health response across the state including educating and enforcing a series of legal measures.  The Premier has remarked that police will be tasked with checking on the new regulations.

Central Coast Health District is responsible for implementing, regulation testing and follow up of suspected COVID19 cases. As mentioned two test clinics have been opened on the Central Coast.

We expect many more government directives and initiatives in the near future.

Now, a few other announcements:

Firstly, Qantas is set to ground almost all of its international flights from late March.

The flight cancellations will see the grounding of around 150 aircraft, including almost all of the airline’s international Airbus A380, Airbus A330 and Boeing 787 fleet.

A spokesperson for Qantas said “International capacity will be cut by 90 per cent until at least the end of May,” and that this “largely reflects the declining demand for overseas travel.”

Woolworth’s today commenced opening its supermarkets exclusively for the elderly and people with disability from 7am to 8am.

Woolworths will also soon be offering care packages to those unable to get to their stores.

Woolworths Supermarkets Managing Director Claire Peters announced at a press conference in Sydney this afternoon, the packages would be available every day from Thursday (20 March).I called in at Woollies in Woy Woy this morning and I’m delighted to say the initiative was very well received and also very well managed by Woollies staff, who as you can imagine have been under a lot of pressure in the last couple of weeks.

Last week, we reported that Meals on Wheels Central Coast and Coast Cuisine had put procedures in place ensure it could continue to offer meal deliveries and services to those affected by COVID-19, unless directly advised otherwise by the Department of Health.

Well today, Meals on Wheels announced that they will also deliver to each of their clients a 4 pack of toilet paper donated by Woollies over the next week or so along with regular meal deliveries.

Dennis Taylor, CEO of Meal on Wheels CC said their role was to ensure our people are safe and healthy and praised Woolworths for the proactive suggestion on the deliveries.

And finally, a few further cancellations:

Football Federation Australia (FFA) today advised that all sanctioned grassroots football competitions and associated training would be suspended for the next four weeks.

Rugby Australia this afternoon put out a statement saying all community rugby related activities are postponed until the 1st week of May. This includes all taining and games.

If you’d like to advise us of any cancellation or any other important COVID-19 announcements, please send an email to this address.

But for now, stay safe and we’ll see you again for more updates in coming days.

Second drowning at Snapper Point in a week