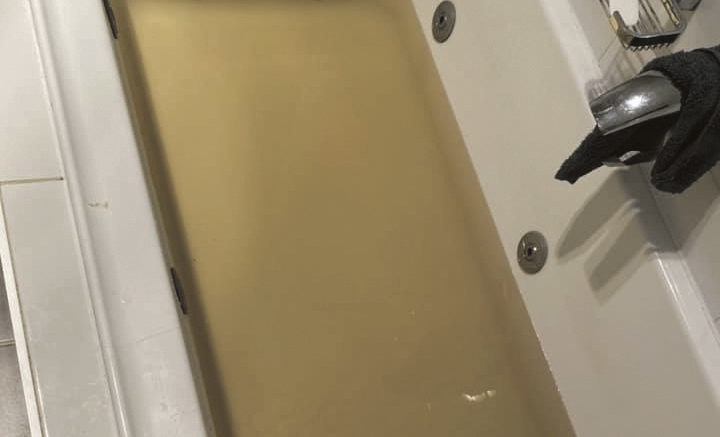 Many people who have been suffering with brown water coming out of their taps for weeks in various areas of the region, are not convinced by assurances from Central Coast Council that the water is safe to drink, despite its colour.

Ratepayers from Point Clare to the Peninsula, Empire Bay and Killcare Heights, have reported muddy looking water pouring from the taps inside their homes, with numerous accounts on social media of water not being fit to bathe or wash clothes in.
Killcare Heights resident, Sharon McEvoy, is convinced that drinking the brownish water over recent weeks resulted in “the worst case of diarrhoea I have ever experienced”.
“About a fortnight ago, I started to get really sick with diarrhoea and battled it for a week before going to the doctor, who conducted some tests,” she said.
“He said tests had revealed aeromonas in my system and that this usually resulted from contaminated water.
“I was so weak I couldn’t even climb the stairs in my home without having to sit down at the top,” she said.
“When you pour a glass of water, the discolouration isn’t as apparent, but when you fill a bathtub or handbasin, you can see how brown it is.”
Since visiting the doctor, McEvoy has been only drinking bottled water. “It is costly and hard lugging bottles of water home, but I am afraid to drink (tap) water until I know it’s clean again.
“We shouldn’t have to live like this.
“Council needs to do whatever is necessary so we can drink the water.”
But Council’s Director, Water and Sewer, Jamie Loader, said there was nothing in the water which would cause McEvoy’s illness.
“Although not appealing, the water remains safe to drink,” Loader said.
“Regular tests performed by Council and independent National Association of Testing Authorities (NATA) registered laboratories, ensure that water is safe for human consumption and complies with the water quality values provided in the Australian Drinking Water Guidelines.”
Loader said discoloured water was a common occurrence which could be caused by several issues.
“It is more frequently experienced during summer and periods of daily or seasonally higher demand in low lying areas, dead end streets, and streets that normally experience low flow velocities,” he said.
“Council regularly carries out programmed flushing on a fortnightly and monthly basis for areas with known historic patterns of discoloured and dirty water complaints to reduce the likelihood of this occurring.”
Loader said the flushing program had been delayed over recent weeks as crews respond to urgent works following heavy storms in February.
In response to calls on social media for Council to release the analytical detail which confirms its statement that the brown water is safe to drink, Loader said Council “had no plans to publish the information at this stage.
“It will be published in the annual report,” he said.
Loader said Council was constantly conducting a water mains renewal program, with $40M to be spent on it this year and $60M next year.
“In the event of discoloured water, first check Council’s website to see if there is a disruption in your area,” he said.
“If there is not a disruption, residents are advised to run the front garden tap into a bucket for 60 seconds every half an hour to check if the water has cleared.
“If the water in the front tap does not improve after an hour contact Council on 1300 463 954.
“Once the water in the front tap is clear, clear inside water lines by running the back garden tap into a bucket until the water is clear.
“Water collected during this process can be used to water gardens.
“Please be aware that the quality of drinking water can change once it leaves Council’s distribution system and enters the plumbing on private property.
“Those experiencing repeat discoloured water incidents are encouraged to contact Council with details of where and when the event occurred to help us analyse the information to determine further action.”