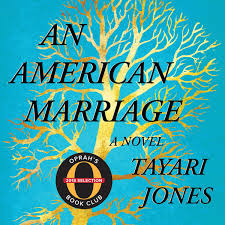 [Book review] Tayari Jones was sitting in a mall when she overheard a young couple arguing.

The woman said, “Roy, you know you wouldn’t have waited on me for seven years”.
Roy’s response was, “This wouldn’t have happened to you in the first place.”
It was this conversation that lead her to write American Marriage.
Roy was born in Eloe, Louisana, the son of Big Roy and Olive.
They are a close, loving family – Big Roy worked at Buck’s Sporting Goods while Olive worked at a café, “We had what we needed and nothing more … and nothing less, my mama would have said”.
Eloe is a small town with little opportunity for a young black man like Roy, who is quick to depart “exactly seventy-one hours after graduating high school – I would have left sooner, but the Trailways didn’t stop through Eloe every day.”
Roy attends Morehouse College in Atlanta were he becomes friends with Andre who introduces him to his childhood friend Celestial.
Celestial is the daughter of Franklin Davenport, who invented a compound that prevents orange juice from separating, which he sold to Minute Maid and is now a rich man.
She is a budding young artist with a promising career.
When the young couple meet again later at a chance encounter in New York, they fall for each other and get married.
Andre is their best man.
The newlyweds are the embodiment of the American Dream – the young executive and artist on the brink of an exciting career.
When they take a trip back to Eloe one weekend, they decide to stay in a hotel instead of Roy’s family home – a decision that will change the course of their lives.
While at the hotel Roy is wrongly arrested for raping a woman and sentenced to 12 years in a Louisiana prison.
Celestial knows he is innocent and retains her Uncle Banks as Roy’s attorney but, despite their efforts.
Celestial visits Roy and they write to each other, but despite her commitment and her independence, stresses appear and Celestial slowly becomes bereft and alone … and grows closer to Andre.
When Uncle Banks eventually managed to get Roy’s conviction quashed after five years, he is released and ready to pick up where he left off.
But it isn’t so easy for Celestial.
American Marriage is a stirring love story that explores the power of love and separation and the minds of three people at once bound and separated by forces beyond their control.
Ultimately it explores the essence of, well … marriage.
Tayari Jones cleverly pokes at the foundations of their marriage even before Roy’s conviction – quarrels over secrets, Roy’s flirtations, having children and their very different socio-economic backgrounds.
The unresolved questions about why the raped woman falsely blames Roy and how he can be so easily and wrongly convicted creates a gnawing sense of instability, or what the Guardian has called a “sinkhole at the centre of the novel.”
The book was winner of the 2019 Women’s Prize for Fiction and the reviews have been positive.
I enjoyed reading it and became engaged with each of the characters as they developed throughout the years, warts and all.
The book takes turns telling the story from each of Roy, Celestial and eventually Andre’s point of view, giving the reader a well-rounded perspective of how each of the characters feel and think and, without which, it would be easy to point blame.
But there are no villains here – just people trying to deal with changing circumstances and get on with living.