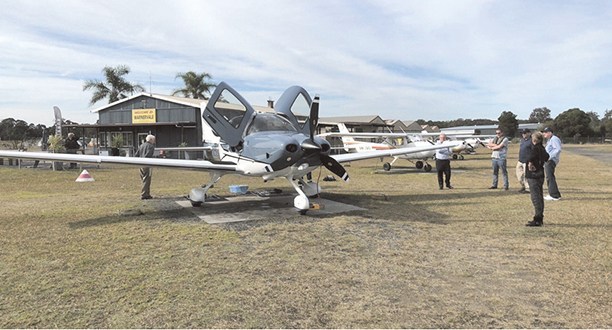 Warnervale was one of only six airports chosen for an Australian demonstrator tour to launch the new Cirrus SR22T G6 Turbo Image: CC Aero Club

Increased tourism from a closer formal relationship with Newcastle Airport will be a focus of Central Coast Council.

The Council hopes investigations will uncover opportunities including marketing and increased numbers of visitors to the Central Coast.
Arrangements regarding air freight traffic that benefit local businesses and industry and any other opportunities for favourable arrangements that deliver a positive financial return to the Coast will be investigated.
The move comes after Deputy Mayor, Jane Smith, addressed the issue at the March 9 meeting of Council.
Cr Smith said it had nothing to do with the council’s deliberations about the Warnervale Airport but was focused on the growing Newcastle Airport.
In a councillor note, she said Newcastle Airport, about 45 minutes north of the Central Coast, had a catchment north to Taree (140km), west to Muswellbrook (100km) and south to Hornsby (100km).
Newcastle Airport was serviced by all the major domestic airlines that provided services to the major destinations along the east-coast of Australia.
In March, 2018, Newcastle Airport released a vision document that outlined areas of growth including increased air freight traffic and potential international routes.
Earlier in the evening at the public forum, speaker, Ben Morgan, from the Aircraft Owners and Pilots Association of Australia, said reaching out to Newcastle Airport was a good idea but it didn’t take into account all the good work already done at Warnervale airport.
He said he hoped this was “a come to Jesus” moment for Cr Smith to deliver for the Central Coast, but it appeared to be a council trying to build a pathway to hand away a productive airport in the region.
“Do ratepayers want to be sending away air freight to Newcastle?” he asked.
“A relationship with Newcastle should bring aviation tourism and general aviation to the Central Coast.”
Later, during the councillors’ debate on the matter, Cr Jilly Pilon tried to get Council to investigate a two way relationship between Newcastle and Warnervale and to report on the opportunities that Warnervale Airport could bring to benefit the Coast.
But Cr Chris Holstein said Cr Pilon’s amendments would polarise debate.
In the end, when she did not get the numbers for her amendment, she voted for Cr Smith’s motion.
The Chief Executive Officer will provide a briefing to Councillors in June that outlines options to be further explored.
He will provide a further report to Council by the end July.

34 memoranda signed by businesses wanting the airport to proceed