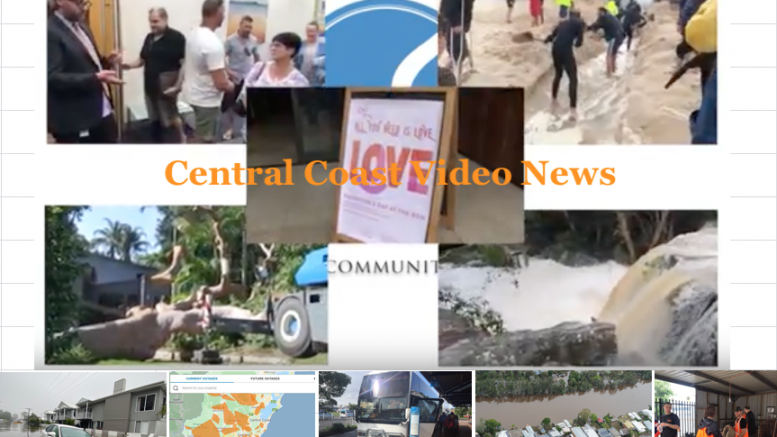 The Central Coast’s top news stories this week: Wild scenes at first Council meeting for the year – Heavy rains across the Coast cause flooding and damage – Over 20 suburbs with power and services with more rain forecast – Dredging at The Entrance – A 300 year old tree succumbs to the storms – Locals take a moment to celebrate Valentine’s Day – World Cup Skiing broke.

That footage is of wild scenes erupting in the public gallery at the start of the first Council meeting for 2020. Local residents from the Tuggerah Lake area vented their anger at Council’s inaction to clear the channel at The Entrance, something they argue was the chief cause of unprecedented flooding and damage to local homes and other property this week. Councillors were visibly stunned by the wild interjections before turning to the business of the day.

Mayor, Lisa Matthews may have been anticipating the hostile reception waiting for her when released a selfie video on her way to the Council meeting.

The State Government on Wednesday declared a state of natural disaster for the Central Coast in response to the flooding. Parliamentary Secretary for the Coast and Member for Terrigal, Adam Crouch, said some 38,000 people were still without power and other services. The declaration means assistance is available for people affected by the flooding, and for the Council clean-up. Minister for Police and Emergency Services, David Elliott, said the assistance will be provided through jointly funded Commonwealth-State Disaster Recovery Funding Arrangements.

The Central Coast has now received over 300mm, or more than 12 inches, of rain in the last 9 days. The rains have fallen right across the Coast including the major water catchment areas with dam level rising over 2 per cent to 54.6 per cent. It begs the question of whether, having just imposed Level 1 water restriction, the Council might now consider lifting them again.

The falls have also brought widespread flooding and destruction around the Coast. The worst flooding has been in the northern parts of the coast, most notably around Tuggerah Lakes.

The flooding has stretched state emergency services to the limit with the SES now reporting over 1400 callouts since the weekend as the Coast’s infrastructure was battered. Over 20 suburbs have suffered power outages, with an estimated 10,000 homes still without power.

Internet services were also disrupted, with the NBNCo resorting to some pretty old-world technology to keep the internet functioning in Green Point.

The trains were also in disarray starting from Sunday night with commuters stranded at Gosford and Woy Woy Stations, or forced to take buses to Sydney.

After two months of fighting catastrophic fires, many of the RFS volunteers were out again this past week assisting the SES manage traffic, pumping water out of homes and clearing roads of fallen trees.

And the Coast looks set to receive more rain this weekend as Tropical Cyclone Uesi tracks eastward toward the northern NSW coast after buffeting Lord Howe Island last night with winds of over 140kms per hour.

Well, just about all sport was cancelled due to torrential rain last weekend, but on the other side of the world, in very different conditions, Somersby’s Abbey Willcox was flying high. Wilcox mesmerised spectators with her bronze medal-winning jump in the women’s aerial at the FIS Freestyle Ski World Cup event in Utah’s Deer Valley.

That was Willcox’s first medal in World Cup skiing and she is now hoping to make her Olympic debut at the 2022 Beijing Winter Olympic Games.

Here at home, East Gosford’s Lachlan Shelley has been selected in a development squad for the Junior Wallabies. The former Gosford Rugby junior has played the last two seasons with the Eastwood Colts in Sydney and will now undertake some intensive training ahead of the Oceania Cup in coming months. A final squad of 30 players will then be selected to play in the Junior Rugby World cup in Italy in July. If he makes it to Italy, a tough start awaits Shelley and his team-mates with Australia being drawn in the same pool as New Zealand, Wales and Georgia.

Well, not all news of rain and flooding this week was bad. The beaches may have been closed, but that didn’t stop these kids from Wagstaffe capitalising on a rare opportunity to use their boogie boards in their own back yard.

And we close this week with Valentine’s Day story. Romantics are filling restaurants and florist shops across the Coast today in celebration of Valentines Day.