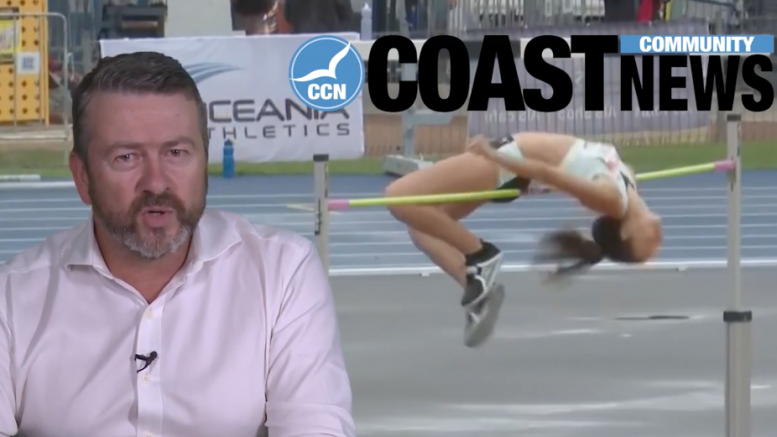 That was local high jumper Nicola McDermott equalling her personal best of 1.96m at the Canberra Track Classic last week. The 186cm tall McDermott is currently ranked 11th in the world and has already qualified for this year’s Olympics in Tokyo, but is looking to crack the 2 metre barrier. In wet conditions, she was defeated by Victoria’s Eleanor Patterson, who also cleared at 1.96m on a countback. But as you’ll see now, she came agonizingly close to clearing at 1.98.

Another Central Coast competitor at the Canberra meet was Gosford’s sprinting sensation, Tyler Gunn. The 20 year old Gunn was quick out of the blocks and powered down the home straight to win his division in 46.94 seconds. The time is still two seconds outside of the Olympics qualifying time, but it was almost a second faster than his time in the NSW Country Championships in Dubbo in mid-January and he looks to be getting stronger by the day after his injury in 2019

With just one round to go, the Kincumber-Avoca secured a berth in the major semi-final against competition leaders Lisarow-Ourimbah after a solid win over Warnervale at Erina Oval. Warnervale posted a skinny 98 runs, helped along by 31 from Tony Cornwell, before H Woodhead clubbed 44 runs off 41 balls, including 4 fours and 2 sixes, to steer the Griffins to victory. Northern Power also made a late dash for the finals, after dismissing Southern Spirit for just 57 runs. B Charlton did the damage for Power in a lethal 5 over spell, taking 4 wickets for just 7 runs. That win leaves Power just two points behind The Entrance who went down to Lisarow-Ourimbah at Sohier Park.

That’s North Shelley boardrider, Macy Callaghan, carving it up at the weekend’s Australian Boardriders Battle. On Day 1, Callaghan she produced a variety of technically sound manoeuvres to net an excellent 8.25 wave score to take the club through to the finals. Then in the semi-final she produced an almost perfect 9.65 to secure second place for North Shelley and entry to the final, ably assisted by Molly Picklem. The final was eventually won by Queensland’s North Shore club.

Well, just when you thought things couldn’t get worse for the Central Coast Mariners defence, that goal was struck against them by a 15 year old kid. After becoming the third youngest A-League debutant, Mohamed Toure then became the youngest ever goal-scorer in the League when he found the net late in the match to secure a 2-0 win for Adelaide. The loss sees the Mariners sink to the bottom of the ladder now on goal differences, having now conceded 34 goals in 17 games.

And the Mariners next game is against competition leaders, Sydney FC at central Coast Stadium on Sunday. That’s all for this week. Check out the internet and mobile phone deals on offer from MATE, proud supporters of sport on the Central Coast.

And we’ll be back next Monday with another wrap from Around The Grounds.