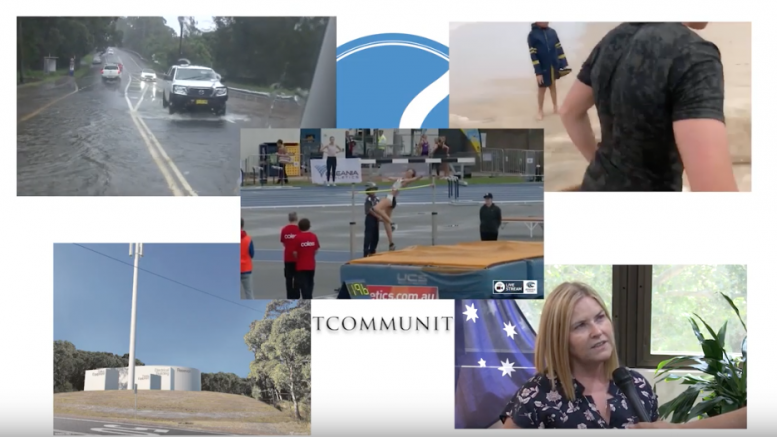 No sooner had last week’s floodwater receded, then another storm caused more flooding around the coast. In one case, stormwaters caused a failure of the sewerage system in Davistown, affecting more than 400 homes. Residents, Bill and Dianne Konigsmark, said they had endured eight days without a toilet and shower, making several dashes in the middle of the night to public toilets at Pirate Ship Park. But Mr Konigsmark commended the Council and Terrigal MP Adam Crouch for their response to the crisis, which included bringing this flotilla of Australia’s iconic yellow and green portaloos.

Well last week we broke the news that the State Government had committed $600,000 in funding, to be matched by Council, for dredging of The Entrance. The funding was committed after heavy flooding caused major damage to homes and properties around Tuggerah and The Entrance. It also led to extended disruptions to power and other services across the region. The extent of flooding has been widely attributed to mismanagement of Tuggerah Lakes and The Entrance channel causing a fierce community backlash against Council across the region’s northern wards.

The NSW Water Minister, Melinda Pavey, weighed into the debate this week, when she visited the affected area and spoke to local businesses. She acknowledged the challenges with dredging but gave a clear message to council to stop blaming the State Government and keep the channel open.

When we were up at the Entrance Georgia, we bumped into Councillor Greg Best. We asked him about the deliberations going on within Council.

And so for most of this week, Mayor Lisa Matthews has been weathering a storm of her own as calls mounted for her to resign. What began as targeted social media campaign last weekend culminating in a Notice of Motion from Councillors Best and Bruce McLachlan to be tabled at next Monday’s meeting.

We also had an interesting conversation with Kevin Armstrong, long-time council observer, who called for a more calm and considered response to the crisis.

In Killcare, residents have challenged the proposal to build a new telecommunications tower at the top of Wards Hill Road to address black spots. The proposal by Optus, VHA and Telstra involves building a 33 metre tower has raised concerns about visual impacts as well as the clearing of vegetation, but several residents living in Killcare Heights have expressed concerns about health risks associated with the prospective upgrade to 5G technologies and associated levels of higher-frequency electromagnetic radiation.

And that was local high jumper Nicola McDermott equalling her personal best of 1.96m at the Canberra Track Classic last week. The 186cm tall McDermott is currently ranked 11th in the world and has already qualified for this year’s Olympics in Tokyo, but is looking to crack the 2 metre barrier. In wet conditions, she was defeated on countback by Victoria’s Eleanor Patterson, who also cleared at 1.96m. Another Central Coast competitor at the Canberra meet was Gosford’s sprinting sensation, Tyler Gunn.

The 20 year old Gunn was quick out of the blocks and powered down the home straight to win his division in 46.94 seconds. The time is still two seconds outside of the Olympics qualifying time, but it was almost a second faster than his time in the NSW Country Championships in Dubbo in mid-January and he looks to be getting stronger by the day after his injury in 2019.

Well, just when you thought things couldn’t get worse for the Central Coast Mariners defence, that goal was struck against them by a 15 year old kid. After becoming the third youngest A-League debutant, Mohamed Toure then became the youngest ever goal-scorer in the League when he found the net late in the match to secure a 2-0 win for Adelaide. The loss sees the Mariners sink to the bottom of the ladder, having now conceded 34 goals in 17 games, and we went down to training to check how morale is holding up.

And things are unlikely to get easier when the Mariners take on competition leaders, Sydney FC at central Coast Stadium on Sunday evening.

And we close this week with some reflections on this week’s “Big and Bold Innovation Summit” organised by Central Coast council. That’s all for this week. If you’re looking for something to do with the kids this weekend, check out “Chalk the Walk” down at the Waterfront Plaza at The Entrance.

Locals and visitors are being invited to join in an interactive pavement gallery featuring renown master street artists, and a 10 chalk masterpiece produced by local artists. The event kicks off at 12pm on Sunday. Stay safe this week, keep an eye out for people who are in need of help, and we’ll see you again with more news from around the Coast next Friday.