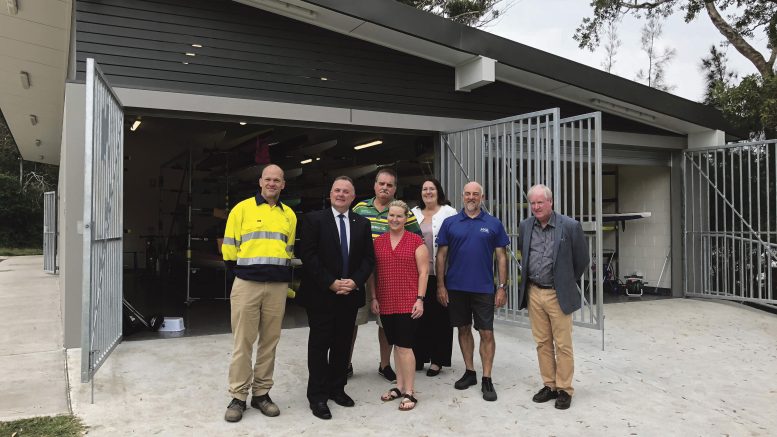 Member for Terrigal, Adam Crouch, Central Coast Mayor, Lisa Matthews and members of the Avoca Beach Kayak Club at the opening of a new amenities block at Heazlett Park in January. The park upgrade project was a recipient of a $485,000 Federal Government sports grant

Member for Robertson, Lucy Wicks, has denied a claim by Member for Dobell, Emma McBride, that many sports clubs in the region “never had a fair chance” of receiving grants under the Community Sports Infrastructure program, in the wake of the “sports rort” saga, which saw former Sports Minister, Bridget McKenzie, step down from the Federal ministry earlier this month.

McBride said the Auditor-General’s report had made it clear that McKenzie had rejected hundreds of applications assessed as having the most merit under the published grant guidelines, and that grant funding was skewed towards marginal seats that the government was fighting to hold or to win.
McBride said this appeared to be what had happened on the Central Coast.

“As the sitting Member for Dobell during all three rounds of the program, my office, like many others around the country, was not kept appropriately informed by the government in relation to these grants,” McBride said.
“Many community sports clubs on the Coast never had a fair chance of receiving grants under the Community Sport Infrastructure program.

“The Ourimbah Rugby Club in my seat of Dobell was unsuccessful in receiving funding. “The club applied for almost $43,000 to create a multi sports facility.
“Our sporting communities have done nothing wrong.

“Many clubs applied for what they believed to be a genuine merit-based grants program and were then cheated out of that much-needed funding.”

McBride said questions remained on how $100M of public funding was administered under the Community Sport Infrastructure Program.
“I have written to every sports club in my electorate to attempt to get to the bottom of how this program was promoted to local clubs and whether any other clubs rated highly by Sport Australia missed out on funding,” she said.

But Wicks said every project that received funding under the program, including those on the Coast, were deemed eligible by Sport Australia.
“The job of a Local Member is to listen to the concerns and needs of those from the community,” she said.
“Having worked with a number of community groups and sporting clubs for many years, I know firsthand just how desperate some of our sporting clubs were for these infrastructure upgrades.

“Emma McBride seems to think that the clubs on the Coast that received funding from the Morrison Government didn’t deserve any support, even though in some instances, their facilities are thirty or forty years old.
“Some facilities don’t even have women’s change rooms for women’s sport.
“This is a necessity for these clubs, not an optional extra.
“All of the information on the Community Sport Infrastructure grant program was publicly available online.

“The publicly released guidelines around this grant program clearly stated that the Minister was the final decision maker, with the Auditor General finding that this program delivered on its intent.”