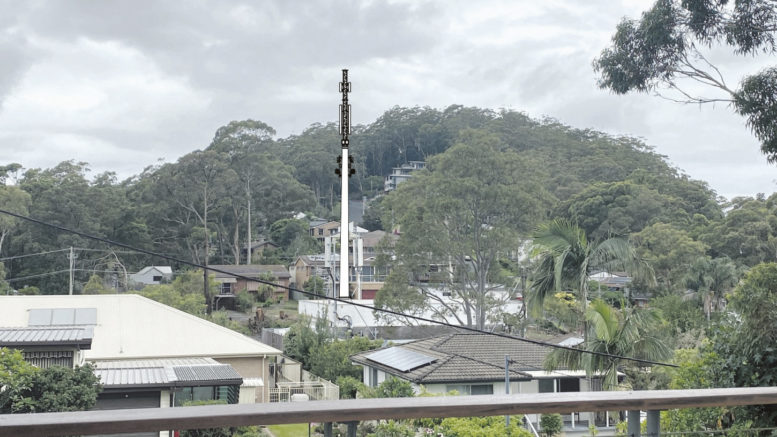 Saratoga residents have slammed plans for a 26 metre telecommunications tower in Davistown Rd, which they say will ruin the amenity of the quiet suburb.

A Development Application (DA) currently under consideration by Central Coast Council from Kordia Pty Ltd on behalf of Telstra, seeks to install the monopole on an existing Telstra Exchange compound.

The proposal would see the concrete pole, with double stack turret headframe, holding six new panel antennas which would provide an overall height of 25.8 metres. Existing Telstra roof mounted antennas would be removed and ancillary equipment installed to prepare the site for 5G capability.

Documents lodged in support of the DA state that the existing structure has limited structural integrity and does not have sufficient capacity to accommodate future upgrades.
“Once the new monopole has been established, the existing Telstra equipment on the exchange rooftop will be removed and relocated onto the monopole,” the documents say.

“The installation will help to provide improved 4G capacity in the area as well as the addition of 5G technology to the site.”
But resident spokesperson, Angelique Perak, said the tower would directly contradict the R2 low-density residential zoning of the area.
“Character guidelines for Saratoga describe it as open woodlands/hillside and it is key that the area remains low density,” she said.
“The tower is completely contradictory to the character and amenity of the area.

“Documents provided with the DA say there will be minimal impact, but this tower would be 18 metres taller than any other building in the area, flanked by private residences.
“Nothing in the DA documents shows the impact on the view to the waterfront and from the waterfront back up to the hills.
“The lovely thing about Saratoga is that it has a sleeping fishing village feel to it, with rolling hills and established trees, but residents up the hill will be looking at this tower at eye level.

“Trees shown in pictures lodged in the documents are no longer there.
“We have mocked up an image showing what the impact will actually be.
“We have always had a small telephone exchange on the site, but the overall bulk and scale of this tower is not in keeping with height restrictions that residents in the area are bound by.”

Perak said the lack of long term research on 5G technology was concerning.
“Also, the report does not outline the actual wattage that the tower will be allowed to transmit,” she said.
“An independent analysis is needed.”
Davistown Progress Association President, Jenny McCulla, said the proposal was completely inappropriate.

“Not even a church would be allowed to put a spire that high in that area,” she said. “This tower would be overwhelming and should not be imposed on the residents who live there.
“It could surely be relocated to other land away from homes.
“I know many people would like better coverage, but we need to care about our neighbours.”

McCulla said that evidence on the impacts of 5G technology was still inconclusive.

“We don’t want to make guinea pigs of our residents,” she said.