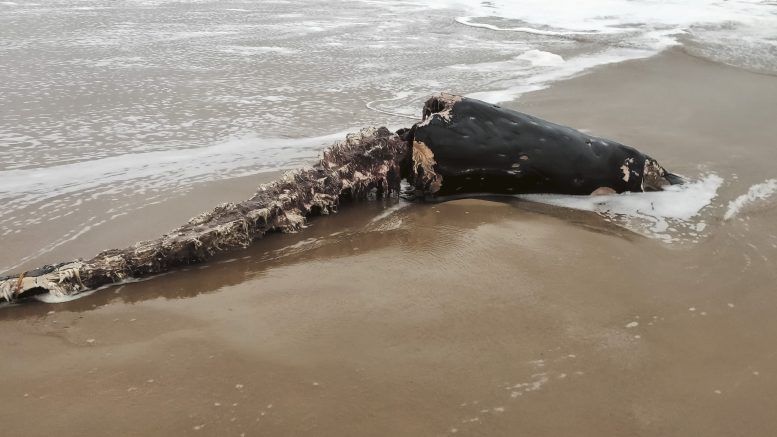 The carcass of the whale washed back onshore

Residents of North Avoca were astonished when a rare “beaked” whale washed up on the beach on February 10.

Ronny Ling, of the Central Coast Dolphin Project, who is also a volunteer for the Organisation for the Rescue and Research of Cetaceans in Australia (ORRCA), said sightings of the “beaked” whale family were rare, due to their normal deep-sea habitat.
“There are around 17 different types of known ‘beaked’ whales in the world, and we suspect that this one may be of the ginkgo-toothed species, which is even more rare,” Ling said.
“Beaked whales are unusual in that they almost look dolphin-esque and are normally found only in the deep sea, where they dive even deeper than sperm whales to hunt squid and fish.
“For one to be in this close to shore is really unusual, you would assume the whale was injured or had some sort of problem to be so far in-shore.”
Ling said the whale got caught in breakers off North Avoca and became disoriented after being pummelled by the waves.
“It was obviously injured when it came in, whether those injuries caused it to be so far in or whether they were caused by the waves is unclear,” he said.
“It was observed splashing in the shallows before turning itself around and heading back out to sea.
“But unfortunately, it swam straight back out into what we call ‘shark alley’, the area between the lagoon and the shark tower.”
The whale was obviously attacked by multiple sharks, with its carcass washing back onshore around 6pm on Monday evening.
“There was a lot of water around following the weekend’s heavy rains and the sharks would have been curious,” Ling said.
“Sadly the whale made an opportune target.
“Unfortunately, there was only about a third of the whale left after it had been demolished by large sharks.”
Ling said the head of the shark had been removed for study.
“The key to identification of the species is the teeth, and it is likely that this was a female whale so the teeth hadn’t erupted,” he said.
“The head will be examined at Kincumber Veterinary Hospital.
“A positive identification could provide useful scientific data.”
Ling said the rest of the carcass would be removed by National Parks and Wildlife Service staff and buried at a secret location, from which the bones could be exhumed in future to provide more data.

World champion is Sports Star of the year