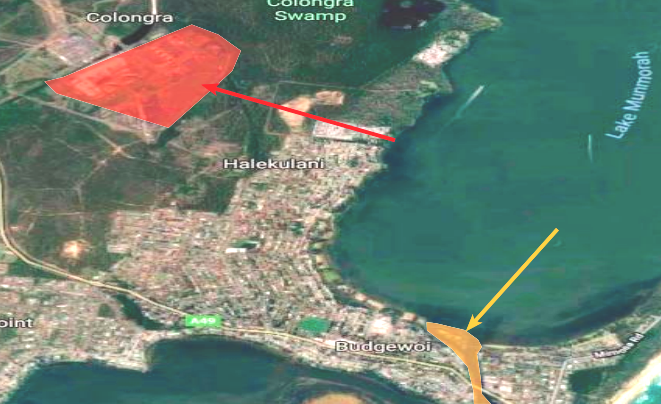 The PFAS site at the Munmorah/Colongra Power Stations is show in red and Budgewoi Creek, subject to fishing restrictions is show in orange. Image: Google Maps with custom layers

[Forum] The audacity and ignorance of Central Coast Council to lay it upon the residents to submit their concern to a plethora of plans and policies, continually amazes me.

It all began with the amalgamation of Gosford and Wyong Councils, when the NSW State Government started to flex its muscle and introduced the Central Coast Regional Plan 2036.

It has now taken on the digestible breakup, to become individual Structure Plans for specific groups of suburbs.

The findings of the first of many exhibitions and workshops for structure plans, the Lake Munmorah Structure Plan Consultation Report, show that either the community is totally complacent about their future and or that Council has failed in its objective to encourage the community and stakeholders to have input into Council’s newly promoted structure plans.
Social media had reached some 8,078 people (2.5 percent of the overall population), yet the results form submissions did not reflect the effort by Council.

The statistics get worse when the findings are broken down to the number of residents from individual suburbs attending the Council drop-in sessions.

From Tuggerah to Chain Valley Bay and Mannering Park, there were 46 people who attended from 16 suburbs, with the greatest attendances being from Lake Munmorah, having 69 residents attending, mainly due to the plan for that region being the first of many.

I recently received confirmation from Council of both the Lake Munmorah Structure Plan Consultation report (41 pages),

But when I asked Council for a hard copy of a larger 257-page report, Draft Operational Plan 2019-20, I was told none were available.

I asked to speak with one of the many Council Planners, but found they also amazingly were not available.

Central Coast Council sent me an email on January 28, appreciating my time to let them know what I believe to be important for the region, even after I had submitted a 30-page submission on the issue on April 4, 2019, of which I have not heard one word.

So much for their appreciation.

Ticking the boxes to pander or bow to Council’s new masters, the NSW State Government, has become the recent agenda.

Survey after survey find that our way of life, our bushland and our beaches, to be our priority, with the latest indicating the need to protect the natural and environmental assets in the area, requests for further pathways and maintenance and protection for our lakes and waterways.

Yet again, the plans and policies of Central Coast Council do not reflect any of these findings.

In fact, our bushlands are becoming narrow strips of trees now being called biodiversity corridors and used as environmental offsets by developers.
Housing estates are given approval to demolish stances of bushland time after time with seas of tiled roofs being common.

Having the potential of a further 40,500 new homes over the following two decades (Central Coast Regional Plan 2036) in the north alone, will have detrimental impacts on our headwaters leading into our lakes and rivers, especially if we can’t get it right today.

Structure Plans are coming up with what the State Government is insisting upon, yet not a mention of the need for any major infrastructure needed to make what is proposed sustainable, whilst behind closed doors, the debate over land ownership impacts on the proposed Lake Munmorah Regional Park.