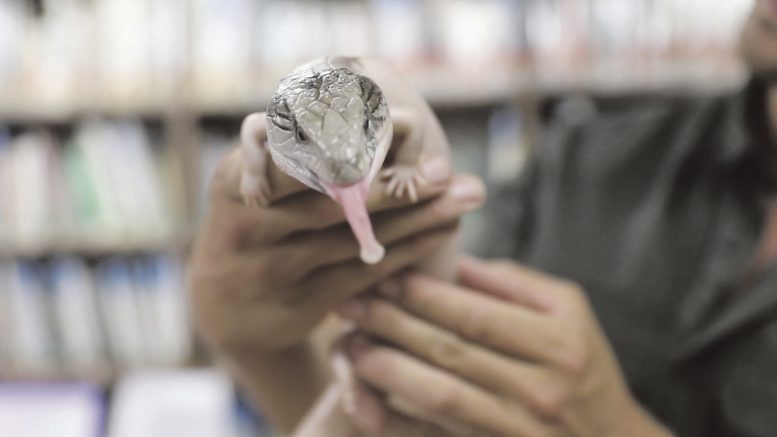 If there’s one thing we know about blue tongue lizards, it’s that their tongues are blue.

But not always.
Keepers at the Australian Reptile Park were stunned recently when a “genetically mutated” blue tongue was handed in.
The unusual lizard was making waves online before it made its way to the Reptile Park, with the person who discovered it taking a photograph and sharing it on Facebook.
This particular lizard has very distinct colourings never seen before, including an albino underbelly, and features a pink tongue instead of blue.

Keepers said that if she hadn’t found her way to the Park, she may not have had a great chance in life.
“In the wild, blue tongue lizards often rely on their usual colourings as a camouflage to deflect interest from predators and will use their striking blue tongue to scare them off,” Head of Reptiles, Daniel Rumsey, said.
“In this case, this particular lizard stands out as she is mostly albino on the underside and lacks the blue tongue to defend herself.

“This means that she is quite likely to be spotted by an unwanted predator and become prey.”

The lizard’s future is being discussed with officials, but keepers are hopeful that she will live a long and happy life as the most unique lizard at the entire wildlife sanctuary.
“I have truly never seen a reptile like this in my entire life,” Rumsey said.
“All of the reptile keepers got extremely excited to meet her and we all couldn’t believe what we were seeing.
“Sometimes you will see some genetic mutations in reptiles, but this one by far takes the cake.
“As an avid reptile lover, it’s always exciting to have something handed in that’s so different and unusual.
“We will treat her like the special girl she is.”
Rumsey said blue tongue lizards are common and often found in backyards around Australia happily munching away on snails in gardens.
When threatened, they turn towards the threat, open their mouth wide and stick out their broad blue tongue, which contrasts vividly with their pink mouth.

Setting aside our differences

Reptile Park re-opens … with a new member of the family