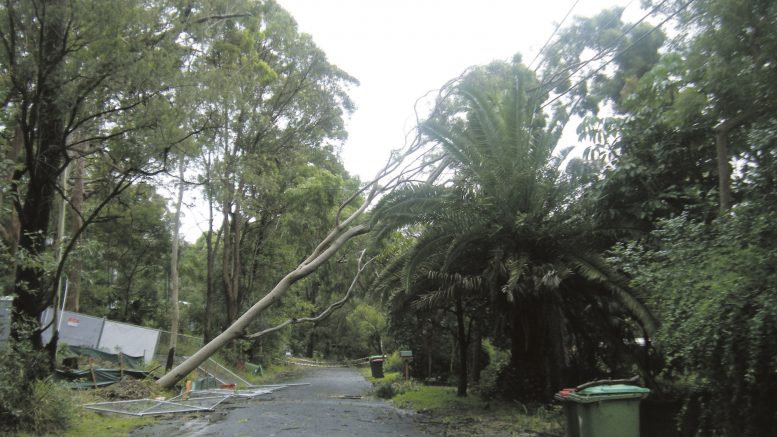 Residents in Cornelian Rd, Pearl Beach, were trapped in their street most of last week because of a fallen tree over power lines.

Crews from Gosford State Emergency Service unit and Pearl Beach Rural Fire Service isolated the scene for safety but deputy commander Mr Werner Klumpp said they could not continue until Ausgrid workers attended to de-energise the wires and remove the tree.

Resident Ms Kay Williams said the tree was moving in the wind and creating a dangerous situation which could cut power to the neighbourhood at any time.

“Cornelian Rd remains blocked and one resident living below the affected power line, which is adjacent the main junction box for all of Pearl Beach, was advised not to sleep in her house as the live wires could come down on her house,” Mrs Williams said.
She said this was a foreseeable consequence of clear felling of trees on the steep block of land between Jade Place and 23 Cornelian Rd in preparation for construction of two residences.
She said she and other residents were seeking answers from Central Coast Council but inquiries were falling on deaf ears.
“I have asked whether Council gave approval for specific approval for the removal of trees which were cut down in December.
“By taking out every tree, the owner has undermined the stability of the block and during the weekend of the severe storms the mud from that block washed down the steep block from Jade Pl into Cornelian Rd and taken the tree with it, that eventually finished up hanging on the power lines.
“These situations of taking out every mature tree should not be allowed to happen as it makes the road structure dangerous, let alone taking the shade for the hotter months,” Ms Williams said.
Development documents show the owners Mr Gene Yu and Ms Judy Wang are planning to build a main residence over four levels fronting Jade St and a secondary, smaller residence at the bottom of the sloping block of land and fronting Cornelian Rd.
The development consent stated that all recommendations were to be adhered to in the Aboricultural Impact Assessment, which accompanied the application.
The assessment, done in December 2016 by Advanced Treescape Consulting in December 2016, said there were 32 trees on the site.
Each tree was assessed and rated for tree retention value and the report lists certain trees to be retained and recommendations about how to protect those trees and how to clear the remaining trees.
A Construction Certificate by private certifying authority, Certibuild, was issued in October last year to allow commencement of the secondary dwelling.

This article appeared first in The Peninsula News print edition 488