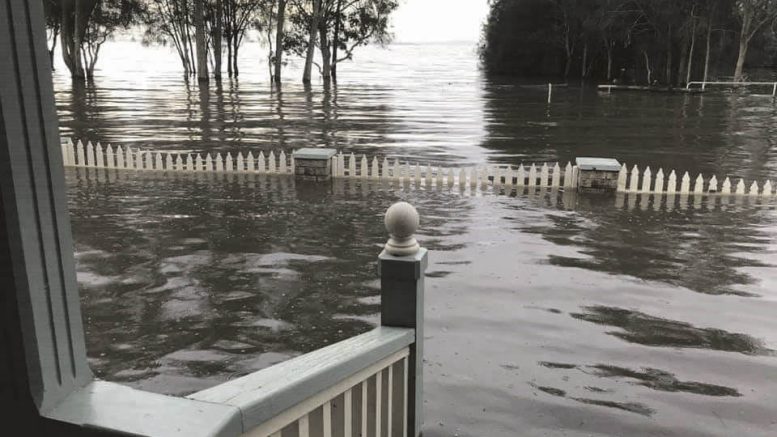 NSW Premier, Gladys Berejiklian, will be invited to visit the coast to see for herself the devastation that the rain has caused.

Central Coast Council will also ask the Premier and her government to commit to a long term solution for The Entrance Channel and to investigate what impact the recently built groyne has had on the channel and the flooding.

The decision was made at the council meeting of February 12 with Liberal councillors, Jilly Pilon and Troy Marquart, voting against the invitation put forward as a mayoral minute by Mayor Lisa Matthews.
The move came after the State Government declared the Coast’s rain as a natural disaster which will make assistance available for residents whose homes or belongings have been damaged, and for Council to clean up public assets.

Cr Bruce McLachlan called the invitation a “re-election motion” as it included Council authorising the Mayor to invite local State politicians and interested councillors to attend a community summit to identify a long term solution to The Entrance Channel.
Cr McLachlan called it a talk fest.
Mayor Matthews said extreme weather highlighted the vulnerability of the area’s community and infrastructure to these events.
“At the height of this event, there were over 80 roads closed, just Council roads, not State roads,” she said.
“Homes and businesses have been flooded, trees and power lines have come down leaving thousands without power.
“Services and accessibility have been severely impacted.
“Council staff have been working around the clock as have State Emergency Service volunteers and Ausgrid employees, and they have the thanks of Council and our community.”
Mayor Matthews said the repair bill was still unknown but was likely to be significant.
“It will be some time before we know the extent of the full cost.
“What we do know is that we have already allocated our budget for this year and for next year and it didn’t take into account a natural disaster of this scale.
“That is why we need the State Government to step in and use their vast funds to help our community recover and to rebuild once again.
“That is why I am calling on the Premier of NSW to urgently visit the Central Coast and visit the areas affected by the recent rain event and see for herself the devastation it has caused, and to work with Council and the community to rebuild.
“The Entrance Channel is another issue that needs the Premier’s attention.”
She said the State Government was the owner of the waterways and the builder of the recent groyne at The Entrance.
“We need to understand what they are willing to do to help find a long term solution to water flow of the channel,” she said.