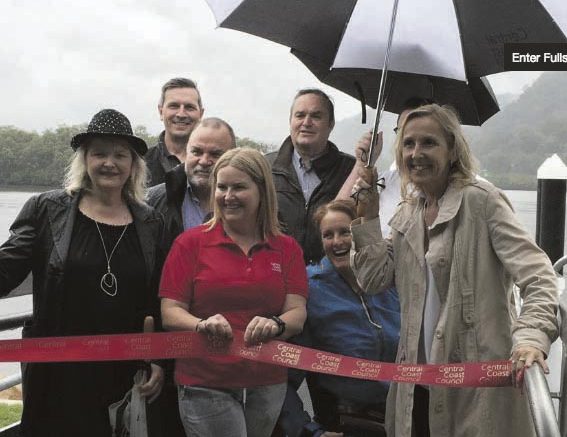 The official party, spearheaded by Central Coast Mayor, Lisa Matthews, and Member for Gosford, Liesl Tesch at the official opening of the new wharf

Spencer residents are hoping that the recent official opening of their new wharf on January 18 will put the waterfront township “back on the tourism map”.

Resident spokesperson, Robyn Downham, said the community, which has now largely recovered from devastating bush fires which held it to ransom from September to December last year, would like to see the public ferry service reinstated, the postman’s run from Brooklyn return to Spencer, and an increase in private charter services, house boats and recreational activities such as kayaking, fishing and canoeing.
“The heavens opened up for the official opening, but it was a jubilant day with huge crowds of happy residents and boat owners rejoicing not only in the much needed rain, but also in the long awaited public wharf that we had fought long and hard for,” Downham said.
“The locals had the opportunity to thank Ms Tesch and Council on the day for providing our stunning new wharf,” Downham said.
She said the wharf would be appreciated by residents of not only Spencer and Gunderman, but also other communities on the Lower Hawkesbury River, including Marlow, Wendoree Park, Neverfail, Lower Mangrove and Greengrove.
“Ms Tesch was instrumental in providing funding for Council to finally address upgrading the previous decrepit and unsafe public wharf,” Downham said.
“The upgrade consisted of a new gangway, pilings and a floating pontoon with solar lighting.
“The wharf was completed in October, just before the catastrophic Gospers Mountain and Three Mile fires that were right at our doorstep in November and December.
“At least the Community knew that if necessary we could all evacuate safely including the elderly, those with walkers, motorised scooters and wheelchairs, from the public wharf.
“The RFS also had easy access to the river as they filled their massive water tankers daily during this frightening time.”
Downham said the community looked forward to continued assistance and support from Ms Tesch and Council in promoting tourism on the Lower Hawkesbury River.

Gosford Council wharf is a disaster

All afloat in Woy Woy