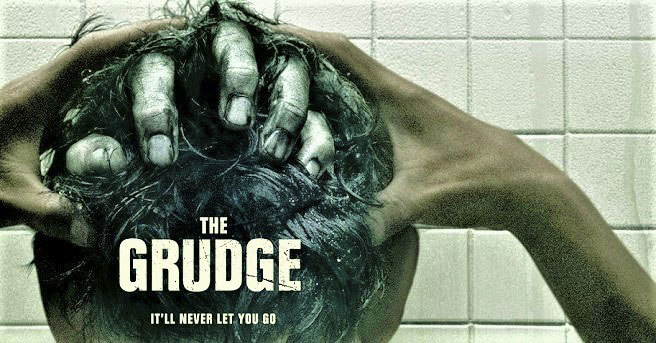 Let it not be said the CCN movie reviews do not cover all genres.

In fact, there are two motivations for reviewing The Grudge – one is to cover all genres, the other is that I saw the original movie in The Grudge series, in 2004, on my first date with my wife (who I later discovered hares horror films) … and, somehow, we still got married.
The latest The Grudge is in fact a “sidequel”, which means it is set in parallel with the original, or thereabouts, as opposed to a sequel or a prequel.
The Grudge of course had two sequels, The Grudge 2 (2006) and The Grudge 3 (2009).
In the latest sidequel, Fiona (Tara Westwood) returns home to her family at 44 Reyburn Drive, after experiencing strange and unsettling things in Japan.
Two years later, a widowed police detective Muldoon (Andrea Riseborough), who’s husband has just died of cancer, arrives in the area with her young son.
She’s partnered with Detective Goodman (Demian Bichir) and togther they investigate the mystery of a corpse in the woods.
Muldoon believes there’s a connection with the Reyburn Drive house after a strange interaction with a woman (Lin Shaye) who lived in the house a year earlier.
When Muldoon starts seeing ghosts of her own, she desperately seeks a way to end the “grudge” curse and protect her son.
While the original movie was amazing for its sense of inescapable dread and its unique Japanese style (so-called “J-horror”) which created the iconic stringy-haired, black-eyed girl ghost, there is (unfortunately) not a lot that positive to say about either its sequels or this latest film.
Basically, it biggest curse is its own stale mediocrity.
Its otherwise talented cast appear lacklustre in what is a very tired, reboot and it is over-reliant on the usual cursed house theme and jump-scare device – something in the dirty bathwater, kabuki death stares straight out of The Conjuring, blood-streaked faces in the mirror, and so on.
The foreboding, bleak atmosphere is undermined by themes that are now very stale.
As one critic writes, “after ‘The Ring’ the idea of a ghost channelled by videotape, once so singularly creepy, now seems about as terrifying as a horror film about a demonic typewriter.”
The one exception may be the sub-plot of, and intense monologue by, William Matheson (played by Frankie Faison ) who wants to euthanize his wife of nearly 50 years with the help of a compassionate carer (Jacki Weaver) in the Reyburn home to harness the property’s tenuous boundaries with life and death.
Matheson isn’t scared of the ghouls – there presence instills him with that life doesn’t end with death, and that there is an eternal bond between every human being that sets foot in that house, a connection that transcends the limitations of time and space, just like death itself.
Probably one just for the very committed horror addicts.

Movie Review – What did Jack do?