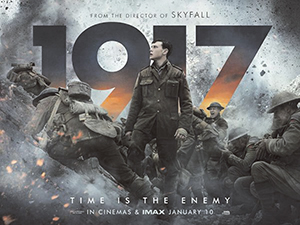 1917 has received wide acclaimed for its bold, immersive film-making style – the entire movie presents as a single, continuous scene – but falls well short of the heights achieved by its WWII look-alike, Saving Private Ryan (or even Mendes’ 2005 Iraq War biographic, Jarhead).

Set in northern France during WWI, two young British soldiers, Lance Corporals Schofield (George MacKay) and Blake (Dean-Charles Chapman) are sent on a mission across no man’s land and into enemy territory.
Their task is to deliver intelligence that will prevent a massacre of 1,600 British 2nd Division troops, who are set to launch a major offensive within 24 hours.

The stakes are even higher for Corporal Blake whose older brother, we learn, is enlisted in the 2nd Division.
The mission sees the two men pick their way through the mud, wire and decaying bodies to the enemy’s trenches, head into dark tunnels, cross open fields and burning villages to find the 2nd Division camp.
The performance from Mackay and Chapman are sound, albeit both lack the presence and charisma of their more experienced support actors, Colin Firth, Benedict Cumberbatch and Mark Strong.
The film’s biggest achievement, like most biographical war stories, is its close and very visceral point-of-view depiction of the battlefront, with its mud and smoke and shell craters, its trenches and tunnels, its whistling bullets and rats and corpses hanging on barbed wire.
In one of the more engaging moments, Schofield cuts his hand on barbed wire before accidentally shoving it into the rotting carcass of a dead soldier.
The technique of wheeling the camera around after showing a scene to then show the characters seeing adds an immersive quality.
The flip-side of the novel film-making technique however, is that it somehow reminds me of watching teenagers play fortnight.
By focusing on the cinematography, the story is lacking in other critical factors – depth of story (and side stories), broader character development, any real suspense and, indeed, in some ways even a threatening antagonist.
More specifically, while there are constant references to the German army and their “trap”, and we see and hear their shelling late in the story, all we see of them are their deserted trenches and destroyed equipment.
The only real encounters are with isolated soldiers that are either lost, wounded or drunk – no advancing hordes of dark helmeted soldiers, no deep rumbling tanks and only the briefest and quietest of by-plane dogfights.
There are also some oddities and overt plot devices that weaken the fabric of the film.
One is how the two lance corporals, who ‘hate’ the Germans and whose nerves are highly strained, suddenly rush to rescue a German pilot from a burning aircraft without any fear he might be armed or try to attack them.
Another is when a British Captain (Strong) advises Schofield along the way that if the message is delivered, to make sure there are witnesses to the orders to abort the offensive.
“Some men just want the fight,” he says.
This is presented as though it is to be a key feature of the climax but is then developed no further.
Mendes clearly is not seeking to make any political commentary with this film, but this scene sticks out like a sore thumb.
The most cliché plot device is the use of the flooding river and waterfall as an escape route and the way the river just happens to drop the semi-conscious Schofield off right next to forest where the 2nd Division is hiding out.
In the end however, it is the cinematography that just didn’t achieve its lofty aspiration.
Mendes previously received wide acclaim for the memorable, continuous sequence in the beginning of the James Bond film, Spectre, set amid Mexico City’s day of the dead festival.
It seems he is intent on taking things to the next level.
But his work in 1917 shows conceit, as if he is deliberately drawing our attention to just how clever it is.
This is just what film-makers are NOT meant to do – to lift us out of the suspended disbelief they have created, to lift us out of the story.