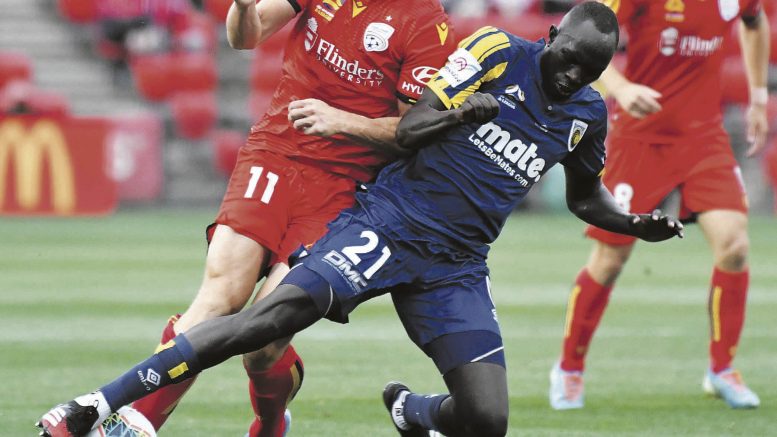 A strong Mariners’ performance was left unrewarded on Valentine’s Day, February 14, as Adelaide United scored twice late in the piece to claim all three points in Round 17 of the Hyundai A-League.

Despite dominating large swathes of the game, the Mariners could not find the final product, and goals to George Blackwood and 15 year old Mohamed Toure late in the game secured a win for the Reds.
The Mariners came flying out of the traps with new signing, Chris Harold, getting the early chances, first seeing an effort deflect out for a corner before striking a volley off the bar after a mix-up in the Adelaide ranks.
The Mariners’ defence remained strong in the first half, with Ziggy Gordon marshalling the back with great composure.

Defence then turned to attack after some good build up play, with Gordon finding himself with time and space to have a shot, and the Scotsman’s drive was well held by Izzo in the Adelaide goal.
Mark Birighitti was called into action towards the end of the first half, clawing away a deflected United cross which looked to be looping its way into the back of the net.
Harold made way for Jair in the early exchanges of the second half, with the Brazilian getting involved in the action immediately.
Good control saw the frontman cut inside from the left and find enough space to unleash a strike which was well held by Izzo.
The visitors had a strong chance to open the scoring when Ruon Tongyik rose highest to meet a Clisby corner, however his deflected header flew just over the bar.

Despite the continuing Mariners’ pressure, it was the hosts who opened the scoring, with George Blackwood curling a strike into the top corner.
Some good build up play from the Reds after a turnover created space for Blackwood to shoot and net his fourth goal of the season for the South Australian outfit.
The score was put beyond all doubt moments later with substitute, Mohamed Toure, netting just minutes after coming off the bench.
Sam Silvera was introduced to the fray late on and looked to spark something, but the score remained 2-0, and the Mariners now look ahead to their next home clash against Sydney FC on Sunday, February 22.
The result sees the Mariners move into last place on the ladder and critically in danger of a consecutive wooden spoon.

There’s just one point separating them from 11th placed Newcastle Jets and it seems the club will be spending the remainder of the season in a scramble to pull ahead of their longtime rivals in the race to avoid the wooden spoon.

Crisis meeting to keep Mariners on the Coast