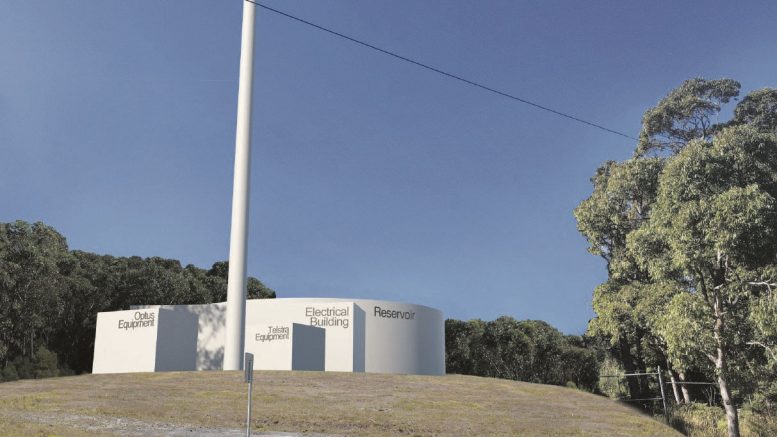 Killcare Heights residents have challenged the Wagstaffe-Killcare Community Association’s claim that there is high level support for a new telecommunications tower proposed to be built on Wards Hill Rd.

Association president Mr Mike Allsop was reported on February 3 as saying that “the vast majority of representations made to the association on the topic support the improvement in services, above all else”.
However, Mr Mark Hill, who lives opposite the proposed site on Wards Hill Rd, said he was getting a contrary view and his preliminary analysis suggested that opposition to this development application was at about 70 percent.

He and other Wards Hill Rd residents met on-site with Central Coast Council officers on February 11 to discuss the proposal by Optus, VHA and Telstra to build a new mobile tower at Killcare Heights.
The mobile service providers want to install a new telecommunications facility on land at 37 Wards Hill Rd, Killcare Heights, which is the site of a council-owned water reservoir.

A statement submitted in support of the development application said that of four potential sites, the Wards Hill Rd site was considered to have the least impact on the surrounding environment and best met the telecommunication coverage requirements.
Other potential sites in Killcare Heights were 223 Scenic Rd; National Park in Wards Hill Rd; and the other in Bouddi National Park, Hawke Head Dr, Box Head.

The statement said the proposal to erect a 33m monopole at 37 Wards Hill Rd would meet the coverage and capacity requirements and was considered most suitable.
It said visual impact was considered “reasonable” and the higher elevation of the location was well placed to provide desired telecommunications coverage.

Mr Hill said the residents opposite the proposed location were directly affected by the visual impact.
“We’d like a tower up on the ridge somewhere but not in the current location,” he said.

“Our concerns are, apart from it being straight in our faces, that everyone who comes to Killcare, Hardys Bay, Pretty Beach and Wagstaffe will have to drive past what will be, for all intents, an industrial site,” Mr Hill said.
There were 76 submissions lodged with Council as at February 10, some with multiple signatures, and the overwhelming majority opposed the tower on the grounds of visual impact, potential health risks from the emission of radio frequencies and bushfire risk.

Many opposed the location of the tower at the front of the site.
Several of the opposing submissions said Council would be inconsistent if it approved the application, citing the previous refusal of a 1.8m colorbond fence at a property on Wards Hill Rd.

The submissions referred to Council’s refusal of the fence on the grounds of its incompatibility and negative visual impact on the scenic character of the area and it posing a precedent not in keeping with the scenic quality of Killcare Heights.
Mr Hill said his submission against the location of the tower pointed out several inconsistencies in the documents submitted to support the application.

“There is mention of Killcare Heights being the target area for the improvement of coverage and capacity yet nowhere in the application is it suggested that the communities of Killcare, Hardys Bay, Pretty Beach or Wagstaffe will be benefited by the proposed development.
“There is considerable emphasis on the impact on vegetation with the removal of 17 trees and ground vegetation … and mitigation measures to reduce impact on flora and fauna.

“There is no indication of what these mitigation measures might be but they would certainly not entail any plantings between the proposed sheds to be constructed and the western boundary fence – there is no room.
“This focus throughout the application of the impact on tree and vegetation removal and suggested mitigation efforts is evidence of the concerns the proponents have to their proposed development and its impact on residents and visitors to the area.”

Mr Hill said he also noted that some of the sites selected for consideration were at the same address and there were other alternatives other than the “unsightly option” at 37 Wards Hill Rd.
“The preference would be the site of 223 Scenic Dr or at Site E, both of which are away from the sight of through traffic,” he said.
The applicant’s statement said that the Scenic Dr site currently housed NSW Police telecommunications equipment.

However, it was not considered a suitable location because it did not achieve the applicant’s required coverage and capacity objectives.
Site E in the statement is within the National Park on Wards Hill Rd.
This site would require tree clearing to establish a compound area and access track and the statement said that “given the challenging topography these locations were further discounted from a radio frequency perspective”.

Mr Hill said he couldn’t understand why one site was suitable for police communications but not for commercial use and he also pointed out that tree removal was also required for the site at 37 Wards Hill Rd.
”Another option in the national park on Hawke Head Dr had been discounted because that road was not sealed but it has been surfaced now with gutters to carry away storm water,” he said.

“So, if reasons given for unsuitability are legitimate, they no longer exist.”
Mr Hill has lived in the Killcare area for 35 years, and the past 10 on Wards Hill Rd, and he said he hadn’t noticed before the graffiti on the only two above-ground structures at the proposed site because it was hidden from view by the vegetation.
“That will not be the case when the building site is cleared to make way for the base station infrastructure and it would be obvious that the new buildings envisaged will also be graffitied as they will be on prominent display for all passers-by,” Mr Hill said.

Many Council assets listed for sale