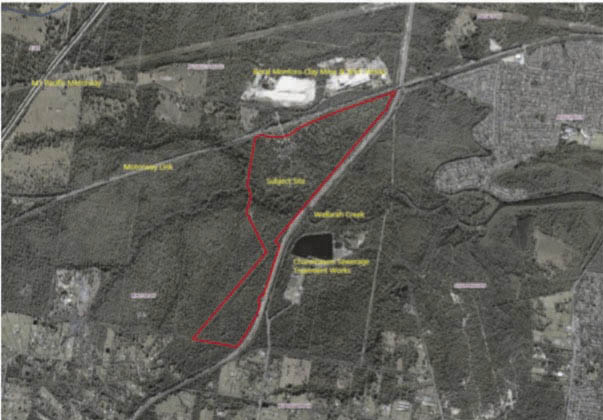 The proposal by Darkinjung Local Aboriginal Land Council is to rezone 42ha of land for general industrial development and another 45ha for environmental conservation along the Doyalson M1 Link Road.

Central Coast Council has a planning proposal and draft development control plan for the Wallarah land which aims to amend the existing planning controls to enable this development.
The site is south-west of Link Rd, about 3km west of Blue Haven, and adjoins Crown Land and other land owned or claimed by Darkinjung, with other nearby industries being Boral Montoro and Charmhaven Sewerage Treatment Plant. A council report says that rezoning to allow industrial development would lead to increased economic value estimated at about $98M and the potential for 900 jobs.

Sustainable Development spokesperson for CEA, Jessie Fancett, said Darkinjung wanted to rezone this highly environmentally sensitive land so most of it could be cleared for an industrial estate, and they’ve tried to curb concerns around environmental issues by saying that they would protect other lands nearby in perpetuity.
“CEA is of the view that these environmental offsets, also known as bio-banking, are simply a way of giving large scale and destructive developments the green light.

“Saying that the offset land will be protected, shouldn’t in any way, shape or form justify causing the extinction of threatened species, especially considering there was no threat of the “protected” land ever being developed.
“Some of the threatened species include the pigmy possum, squirrel glider, white-bellied sea eagle, wallum froglet, stevens banded snake, eastern freetail bat, little bentwing bat, little lorikeet, grey-headed flying fox,” Fancett said.

“The plants include bynoe’s wattle (acacia bipoeana), black- eyed susan (tetratheca juncea) and the rarely seen charmhaven apple (angophora inopina).
“Darkinjung is the largest private landowner on the Central Coast, so surely they can find a way to work with Council and State Government to ensure that they can meet their economic goals while focusing on protecting and nurturing the land for the sake of future generations.”

Fancett said the CEA was calling on Councillors, who recently voted to declare that we are in a climate emergency, to honour their commitment to our environment, and oppose the rezoning proposal for this unsustainable and destructive development.
“With the Council election coming up in September, CEA will be closely following which councillors support sustainable development,” she said.
“Our 5,000 plus members will be following this proposed development and others like it very closely.”

This proposal has been in the planning stages since 2015 and now Council has placed the proposal and accompanying documentation on public exhibition until February 28.
Darkinjung Aboriginal Land Council holds a portfolio of about 3,500ha and is the largest non-government landholder on the Central Coast.
This proposal is included in the Interim Development Delivery Plan, as developed by the Department of Planning, Industry and Environment, which was released in February, 2019, and outlines the development direction of Darkinjung lands to foster the best interests of Aboriginal people in the region.