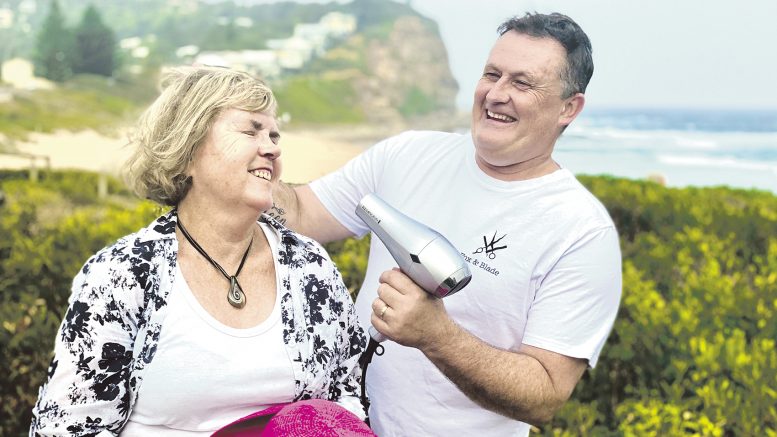 A trip to your hairdresser could help save your life.That’s the message from a local surgeon who recently removed a dangerous skin cancer from a woman, identified by her hairdresser.

Central Coast Breast and General Surgeon, Dr Mary Ling, has praised the efforts of hairdressers and barbers who keep an eye out for questionable moles and spots on their clients and said it was that kind of vigilance that led to the removal of a dangerous Basal Cell Carcinomas cancer from the scalp of her patient, Roslyn Raison.

“I didn’t feel or see anything because I have very thick hair and always wear hats,” said Raison of Macmasters Beach.

“I was very grateful because I don’t think I would have noticed it myself,” she added.

Dr Ling said the Central Coast was one of the worst regions for skin cancers in the state, with hairdressers uniquely positioned to detect them.
“The Central Coast is one of the top five skin cancer hotspots in NSW.
Empire Bay’s Fox and Blade barber, Errol Baker, is one such professional who takes it upon himself to tell clients to get spots and moles checked.
“We are not doctors, but hairdressers and barbers are certainly a good first point of call to alert people about changes to spots and moles, as we are often in your hair every six weeks,” Baker said.

“I look for asymmetry (moles that divide in half), changing colours and moles of different colouring, and quite often we also see scabby/crusty spots on top of the ears,” he said.
Baker believes new hairstyle trends, particularly for men, are also contributing to the development of skin cancers on the head, scalp, neck and ears.
“I regularly see a lot of skin cancer, even in younger men, particularly outdoor tradesmen who often do not wear shirts or put sunscreen on exposed areas such as the arms, back of the neck and ears.
“The new trend for men to have shorter cuts based on styles from the 30s through to 50s doesn’t offer the same protection that say the longer beach styles did,” Baker said.

New campaign to get young Australians thinking about their skin