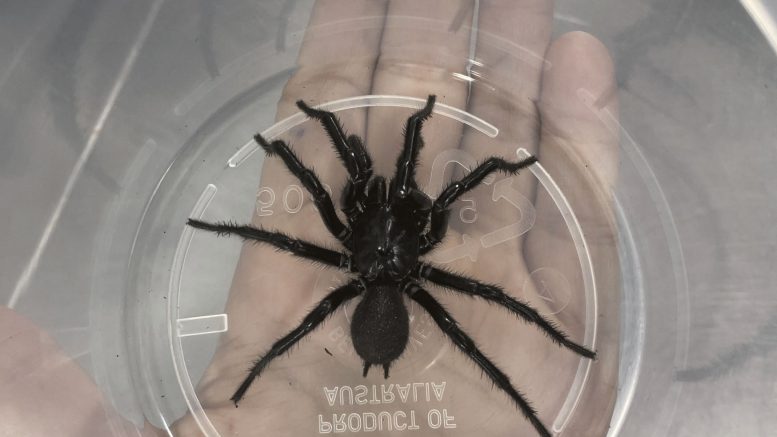 A giant funnel web spider handed in this week to the Australian Reptile Park has reinforced the need for Central Coast residents to remain vigilant in looking out for the spiders following recent rainy weather followed by intense heat.

Keepers at the park have named the huge arachnid, which was handed in at one of the park’s drop-off points at John Hunter Hospital in Newcastle, Dwayne ‘The Rock” Johnson.
Keepers are eager to locate the suburb it came from, with hopes of finding more of the large spiders, as they produce larger amounts of venom for the antivenom program.
“Having Dwayne ‘The Rock’ Johnson as part of the venom program is so amazing because he will save a lot of lives with the venom that he will produce,” Co-director of the park, Liz Gabriel, said.
In January, the park sent out an urgent warning asking members of the public to safely catch the spiders and deliver them for use in the antivenom program, with an “amazing” response.
“People can bring any collected spiders to the Reptile Park itself,” Gabriel said.
“However, if they can’t get to us, we have drop off zones around Sydney, the Central Coast and Newcastle, and all facilities are provided with a spider safety kit to house the spiders until our staff can come and pick them up each week.”
The park relies on public donations of funnel web spiders to keep venom supplies ongoing.
The spiders are milked weekly for their raw venom, which is then sent to Seqiris in Melbourne to be made into antivenom.