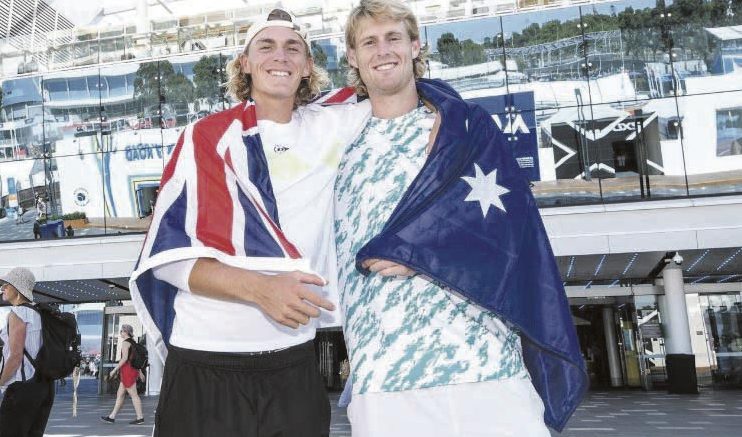 The dream run of Wyong Tennis Club’s Max Purcell through the Australian Open Men’s Doubles Grand Slam has come to an end.

Purcell, who hails from Terrigal, and his partner, Luke Saville, went down to eleventh seeded Rajeev Ram and Joe Salisbury in the final at Melbourne’s Rod Laver Arena on February 2, but not before making their own mark on the competition.

Wildcarded into the tournament, Purcell and Saville turned heads as the first Australian pairing to reach the Men’s grand final since Todd Woodbridge and Mark Woodforde in 1998, before Purcell was even born.It’s a huge achievement for the young players, who went down 6-4, 6-2 against the American-British duo, with the Australians projected to rise to around 40th in the Men’s Double rankings.

They also banked the biggest pay cheques of their respective careers, at a combined $380,000, not a bad pay day for a couple of 20 somethings.
“It’s been great fun to share the court with a really good mate and to win five matches at a Grand Slam, it’s amazing,” Purcell and Saville told Tennis Australia post match.
“It wasn’t the result we hoped for, but we played well in the first round, and to knock off the eighth seeds in the second round was amazing.
“Just the whole week was a highlight.
“We can really build on this Aussie Open, honestly.
“It’s been a roller coaster, it’s been a long few weeks for us, we’re going to take a few days to digest the result.
“It really sets up our year,” they said.
Ram and Salisbury broke serve in the seventh game of the first set and consolidated that with a hold to push ahead 5-3.
Purcell saved two set points on his serve in the following game to keep the Aussies alive, yet the opposition served out the opening set and pushed ahead 5-1 in the second, helped by a resounding break at love in the third game, during which errors hurt the home grown pair.
A tight seventh game unfolded in which Saville and Purcell eventually held to remain in the contest, but with Ram serving for the title, he and Salisbury did not falter.
“I don’t really think that unforced errors was the case,” Purcell said when reflecting on the match.
“Maybe we missed some balls, but I feel like the pressure they put on us, we might have had some balls we shouldn’t have missed, but the fact that we had so much pressure because they weren’t giving us those balls so often, made them forced errors, even if on paper they’re not counted as that.
“All credit to them, they played way too good today.
“And regardless if we played as good as we had all tournament, I don’t think we were beating that level today.
“We have to take our hats off to them.
“They won today and they’re Grand Slam champions, and we’re still trying to hold our head high,” Purcell said.

New intercity train fleet will be a step backwards

Gosford show by any other name