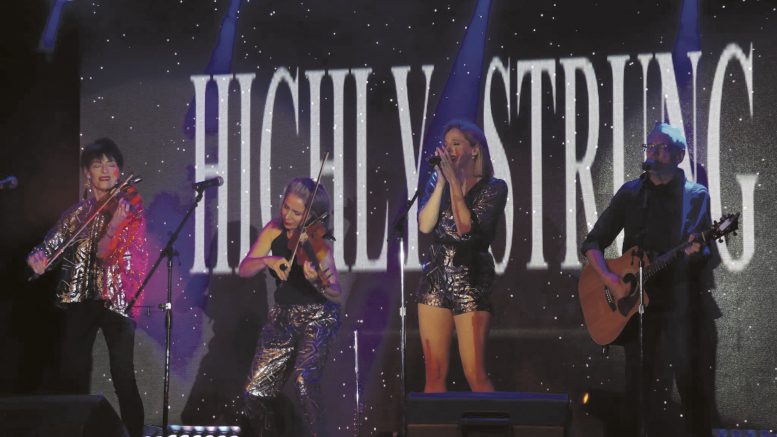 The second concert in the Troubadour Folk Club’s Fabulous February series will feature the Highly Strung Rock and Roll Orchestra.

Troubadour president Mr Michael Fine said the family orchestra was a popular cruise ship band.
“Despite their extensive touring throughout South East Asia, the islands of the South Pacific, Australia and New Zealand, this is their first appearance in the Port of Woy Woy,” Mr Fine said.
Mr Fine said Highly Strung’s line-up of musicians was enough to excite any music lover.
“Local virtuoso Mary O’Mahony and Bernadette McCoy (sisters-in-law) each play electrifying violins, while Stella McCoy is lead vocalist and the woodwind section.
“Bernadette’s husband Justin McCoy, who is Stella’s dad and Mary’s brother, supplies the rest of the band’s sound through his acoustic guitar playing.
“With strong male and female vocals and four part harmonies, this is a powerful and very popular orchestra,” Mr Fine said.
According to Mr Fine, the band began in the 80s as Hat Trick.
“It was as Hat Trick that they established their signature sound that draws together contemporary rock with Irish and Classical music.
“Throughout that decade music lovers pursued the band from venues to nationwide television performances on Ray Martin’s Midday Show, Kerri-Anne Kennerley’s Morning Show and Clive Robertson’s Newsworld.
“These days, it usually costs thousands of dollars to get a ticket to their cruising shows, but after so many of their fans have pleaded for a local performance, they’ve finally agreed to a special appearance at the Troubadour.
Highly Strung will perform at Woy Woy’s St Luke’s Church Hall from 7pm on February 15.
Doors open from 6:30pm for the ticketed event.