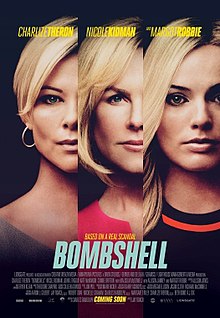 It’s a dangerous place for a male media person to tread, but … well, here we go.

This week’s review is of ‘Bombshell’.

The film is a biographical drama based on the true events surrounding the successful lawsuit against (the late) Roger Ailes, former CEO of Fox News channel, for sexual harassment.

It might even be considered a dangerous film for Jay Roach to make, directly targeting the current serving President Donald Trump, a ratings star for Fox at the time, as being complicit in the appalling, misogynistic reign of Ailes (John Lithgow) at the network.
While Ailes is clearly the villain in this film, the spectre of Rupert Murdoch is also ever-present and seen to be at least partly complicit in the culture at Fox. (When Ailes was eventually dismissed from Fox, he was not charged with any crime but instead reportedly pocketed a $40 million severance cheque.)

The film is largely told by the fictional character of Kayla Pospisil (Margot Robbie) and while it is essentially about the lawsuit launched by the channel’s former anchor Gretchen Carlson (Nicole Kidman), its primary protagonist is Carlson’s rival and Fox News presenter Megyn Kelly (Charlize Theron).
Kelly has been the subject of repeated sexual intimidation but suffers in silence, believing any compliant to be not only futile, but likely to end her career at Fox and elsewhere in the industry.

She infuriates the Fox News fanbase as co-moderator of the 2016 Republic Debate by challenging Donald Trump on his anti-women attitudes.
When the ageing Carlson is removed as co-anchor of the popular Fox and Friends program and transferred to a less popular show where she continues to suffer from sexual jibes and demeaning behaviour, she meets with lawyers.

Along the way, there are harrowing scenes where young, vulnerable women are either preyed upon by the powerful men of Fox or otherwise subjected to crude and humiliating sexual harassment.
Pospisil is Fox’s newest hire, a fledgling producer whose ambition and guileless optimism lead her too into Ailes web.
Pospisil’s is a fictitious character, a composition of all the young women caught up in Ailes web of sexual intimidation.

When Carlson subsequently file a harassment suit against Ailes and sets about finding evidence and testimony from other women.
When the suit is filed, tensions arise as we wait to see how many women come forward.
And so begins an enthralling drama where many of the men don’t want to rock the boat, but also where many of the women do not want to jeopardize their careers (or want anyone to know what they may have done to sustain them).

The film has been criticised by some for some factual inaccuracies and for taking too much artistic licence, but it presents the most powerful portrayal yet of the events at Fox which preceded the Harry Weinstein saga and the subsequent #MeToo movement.
It does a great job at showing the injustices faced by the women and the dilemmas they found themselves in, including those many women who said “no” and were fired from Fox.

In one scene, a female journalist is asked for sex in return for career advancement, and her reaction is to apologise: “I’m sorry if I’ve given you the impression that our relationship could be anything but professional…”
But perhaps the single most uncomfortable scene in the film is where Ailes gets Pospisil alone and insists she lifts her dress to show him her legs, urging her to go higher and higher as television is a “visual medium.”
Robbie portrays Kayla’s distress masterfully.

One wrenching element of the culture at Fox is highlighted by Pospisil’s predecessor, who was also a sexual victim of Ailes, and is so desperate to get out of her situation that she basically grooms Pospisil as her “replacement”.
This element alone has created very divided views on whether earlier victims of sexual abuse, those who either do not speak up or who perpetuate the horrors. should be blamed, pitied or just supported like all other victims.

Bombshell is, in fact, the third screen account of Roger Ailes downfall, following the documentary ‘Divide and Conquer’ and the Showtime series ‘The Loudest Voice’.
Megyn Kelly herself has said the film does have several factual inaccuracies but that it did a great job in trying to capture what it feels like to be harassed and intimidated.

(She has also praised Lachlan Murdoch for supporting her from the moment she came to him with her complaint.)
At the 92nd Academy Awards, it earned three nominations: Best Actress (Theron), Best Supporting Actress (Robbie), and Best Makeup and Hairstyling, winning the latter.
The film also received two nominations at the 77th Golden Globe Awards (for Theron and Robbie).