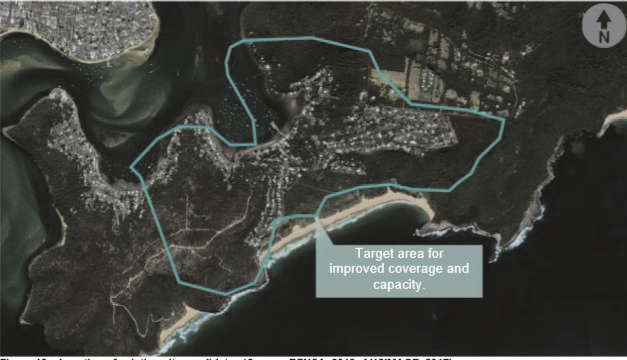 The Wagstaffe-Killcare Community Association has given conditional support to plans by Optus, VHA and Telstra to build new mobile tower at Killcare Heights.

The mobile service providers propose to install a new telecommunications facility on land at 37 Wards Hill Rd, Killcare Heights, which is the site of a council-owned water reservoir.

A statement submitted in support of the development application said that of four potential sites, the Wards Hill Rd site was considered to have the least impact on surrounding environment and best met the coverage requirements.

Other potential sites in Killcare Heights were 223 Scenic Rd; National Park in Wards Hill Rd, and the other in Bouddi National Park, Hawke Head Dr, Box Head.
The statement said the proposal to erect a 33m monopole at 37 Wards Hill Rd would meet the coverage and capacity requirements and was considered most suitable.
“It is not located near community sensitive locations such as childcare facilities and schools.

“Carriers equipment would be co-located on a single facility.
There is potential for Council or other carriers to co-locate on the new facility.”

“Visual impact is considered reasonable; and the higher elevation of the location is well placed to provide coverage.”
Wagstaffe-Killcare Community Association president Mr Mike Allsop said the association fully supported improved telecommunications coverage and capacity in all areas of the Bouddi Peninsula.
“We have pressed for several years to improve mobile reception in our hilly terrain, especially down towards the surf beach and in the corners of Wagstaffe, Pretty Beach, Killcare and Hardy Bay,” he said.

“The proposal seems to largely meet the objectives of expanded coverage and increased capacity but may still have some remaining black spots.
“As a smooth concrete tower with conformal antennae it is designed to survive a direct bushfire attack without the need to clear surrounding trees, however, it will be visible on the Wards Hill Rd frontage in front of the water tower,” Mr Allsop said.

In an official submission commenting on the development application, the association stated that the facility was an essential utility for modern living but most especially in times of emergency.
“Current arrangements are unacceptable.

“We recognise that a facility needs to be able to provide signals into shielded hillside and valley areas such as Killcare Beach, Putty Beach, Killcare, Hardy’s Bay, Pretty Beach and Wagstaffe.
“Certain areas of Killcare Heights are currently able to receive signals from across Brisbane Water, so we would expect a solution which integrates these base stations to a certain extent.

“We also recognise that to service the hidden areas, a tower facility is required on accessible property if a multiple mini-tower solution is not feasible or practical.
“This proposal appears to largely meet the requirement, and we are in favour of it progressing subject to conditions.
“We note that nearby street canopy and roadway alignment will largely hide the tower itself to people driving by on Wards Hill Rd until they are within about 100m of the site.

“There is no disguising the tower at a distance, but if that is what the solution requires.
“We accept that as a modern price to pay for an essential utility.
“We also note that all structures are planned to be built to flame-zone standards for survivability.
“However, we are concerned about the visual impact at ground level of having the equipment buildings being placed directly on the boundary line along Wards Hill Rd.
“This is a scenic area and a gateway to one of the most beautiful localities on the Central Coast.
“This affects both the residents opposite as well as providing an unwelcome surprise to visitors and others as they round the bend on Wards Hill Rd.
“We ask that a variation in location of these ground level buildings be considered so that low to medium height vegetation may be established on the site itself in the vicinity of the base of the tower.

“We ask that irrespective of the above, a condition of consent be included that requires the proponent and Central Coast Council to work together to provide a vegetation screen along the length of the site along Wards Hill Rd on Council property, and this be maintained to a high standard.
“We respect that this development provokes strong reactions and expressions both of support and objection in our community.
“The vast majority of representations made to this association on the topic support the improvement in services above all else.

“We ask that the full council consider the matter in the community interest and ensure that all avenues for low level screening are incorporated into the consent,” the submission concluded.

Budgewoi Sailing Club to disband after one final regatta