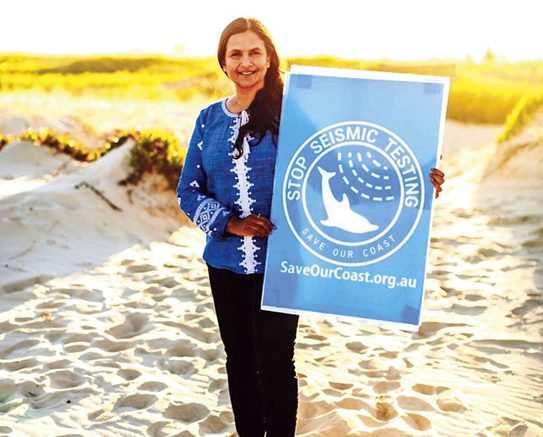 Natasha Deen, of Save Our Coat, is fiercely opposed to more gas exploration

A $2B energy deal announced on January 31 between the Federal and NSW governments has provoked a mixed reaction on the Central Coast, with the business community embracing the initiative and The Greens and environmental groups denouncing it.

The deal outlines a number of initiatives aimed at “strengthening grid reliability” resulting in lower power prices for consumers, including commitments from the NSW Government to “facilitate investment opportunities to inject an additional 70 petajoules of gas per year into the east coast market”.
Prime Minister Scott Morrison says the agreement outlines “a responsible transition of the NSW electricity sector to lower emissions technologies while recognising the critical contribution that energy dependent manufacturing jobs make to the economy”.
Premier Gladys Berejiklian says it will ensure that the state continues to “strengthen and diversify” the state’s energy sector, securing traditional energy sources while growing renewable energy investment across the state.
At its heart, the deal aims to consolidate and expand the use of gas as a power source as the country moves away from coal and towards renewable energy.
NSW Business Chamber, Central Coast Regional Director, Paula Martin, said it was a “welcome relief” to see the Prime Minister and Premier “working together to address our rising energy costs.
“This package of measures promises to bring down costs while boosting confidence that we can avoid looming supply shortfalls,” Martin said.
“In recent years, gas prices in NSW have tripled.
“With NSW production decreasing, gas has had to be shipped longer distances into the state.
“Nearly 20% of Central Coast workers are employed by businesses that rely on gas for the production of baked goods, manufacturing and food services.
“The last thing we want to see is a continued rise of energy costs resulting in business employing less staff to stay competitive.”
Martin said freeing up gas supplies would address a “competitive imbalance” being felt by many businesses on the Coast.
But The Greens have claimed that the deal will “lock in polluting gas and put Australia’s weak climate targets on a certain path to failure”.
Newly elected Greens Federal leader, Adam Bandt, described the move as a “climate deal with the devil.
“Toxic methane gas is not a transition fuel, it is a climate time bomb,” Bandt said.
“When gas is fracked, toxic methane leaks into the atmosphere.
“As a global warming gas, methane is up to 86 times more powerful than carbon dioxide.
“Gas is a big part of the reason that Australia’s greenhouse emissions have been rising under the Coalition and this dirty deal will only make things worse.”
Save Our Coast founder, Natasha Deen, agrees.
“Any credible plan towards renewable energy would not consider the use of climate damaging gas, with its fugitive emissions that are impossible to regulate or measure, that impact on climate and ecosystem health,” Deen said.
“Plans for further offshore gas mining, when two thirds of our gas is already exported, will be met with fierce opposition from communities, environmentalists and scientists.”
Jake Cassar, of the Coast Environmental Alliance, said the root of the problem lies with the relationship between the Government and the fossil fuel industry.
“Until we have elected leaders that put the Australian people before the big polluters, this ‘transition’ that they are speaking of will happen too slowly, if it happens at all,” he said.
“It’s also important to also acknowledge the inconvenient fact that everyday Australians need to make more environmentally conscious decisions in our daily lives and move towards using less fossil fuels.
“We need to show our elected leaders the way through the choices we make as consumers.”
Community Environment Network Deputy Chair, John Asquith, was less damning in his criticism of the energy deal.
“For the last 20 years at least, gas has been identified as an interim fuel as we transition from coal to renewables, and that has been happening,” Asquith said.
“While gas still produces CO2, it is a lot less for the amount of energy you get than with coal.
“Gas enables you to bring in more energy sources such as solar and wind turbines, but there are times when they are not enough, so gas can fill the shortfall.
“Gas turbines have an instantaneous start-up, but what has been slow, is bringing in enough gas to cover the gaps until we get more renewables.
“While the announcement is good, we need to be moving much faster to reduce CO2 in the atmosphere.
“The Bureau of Meteorology has said that Australia’s average temperature has gone up by a full degree over the past 100 years and experts say this is directly related to the amount on CO2.”
Asquith said vegetation would be slow in regenerating following the bush fire crisis, exacerbated by drought conditions, which would see even more increase in CO2.
“We need to move more quickly to wind, solar and batteries,” he said.