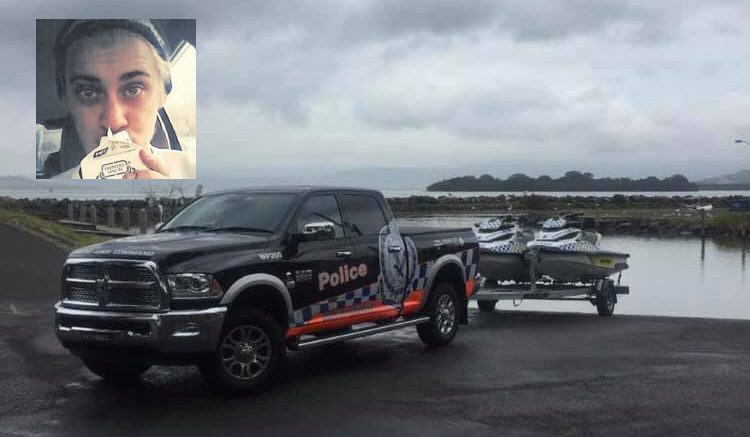 Police rescue and other agencies were involved in the search for the missing 25 year old kayaker. Inset: The deceased Simeon McNiell.

The family of Simeon McNeill, the man who died whilst kayaking on Budgewoi Lake on New Year’s Eve, has revealed that he was attempting to rescue his cousin.

According to police, McNeill, his cousin and a friend were kayaking on the lake on the evening of December 31, 2019, when a strong southerly wind hit, worsening conditions on the water, and which saw the group separated.

McNeill was found deceased in waters off Budgewoi at around 11am the following day. Family member, Allison Curtis, has since revealed that McNeill was attempting to rescue his cousin

“On New Year’s Eve, our family was out canoeing when a sudden gust of wind hit the water and separated Simeon’s youngest cousin from the group. “He desperately tried to make his way over to help when his kayak flipped and dragged him under water.

“The strong current and wind was too hard to fight. “After hours of trying to retrieve him, he was found by emergency services. “Simeon passed away trying to save the life of somebody else which sadly cost him his own,” Curtis said.

Curtis went on to launch a Go Fund Me campaign for McNeill’s immediate family to help cover funeral expenses.

“Simeon was a happy fun and loving human being who clearly put others before himself. “He was always the life of the party and made everyone around him happy.

“This is a devastating time for Simeon’s family and all involved,” Curtis wrote on the fundraiser.

The fundraiser was created on January 1 and has since raised $5,260.