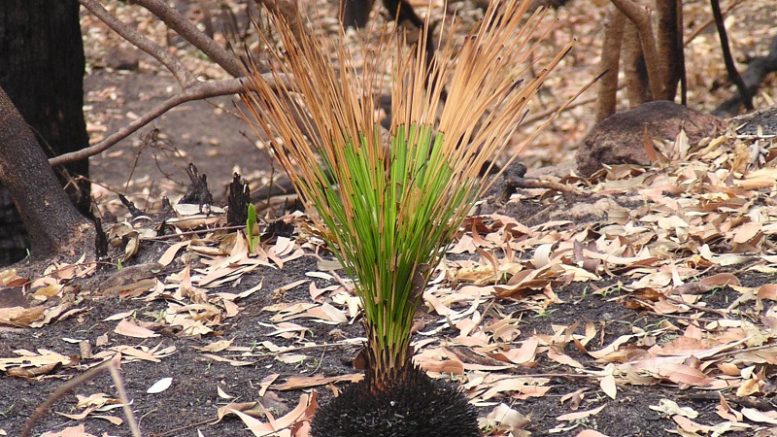 Areas of the Central Coast are already starting to regenerate, with the Gospers Mountain and Three Mile fires now being reported as being under control by the RFS.

A fire which caused some concern on New Year’s Eve in Arizona Rd, Charmhaven, was also controlled quickly. The Coast fared better than many other areas of the state in the face of the bush fires which posed a huge threat in December. Despite some close calls, no lives or property were lost in the at-risk areas around Spencer and Gunderman.

Spencer resident Robyn Downham said there was extreme gratitude in the community for the hard work of firefighters, along with a lingering feeling of caution. “We aren’t out of the woods yet and have been told to remain vigilant, ” she said. Downham said residents had been relieved when Wisemans Ferry Rd was reopened prior to Christmas.

Regeneration is already being witnessed in some of the region’s outlying areas and the Australia Walkabout Wildlife Park at Calga has retrieved approximately 300 animals from temporary accommodation and is once again open for business.

Although a period of lower temperatures is providing some relief, residents are urged to stay alert and continue to monitor the RFS app Fires Near Me.

Meanwhile, as fires continue to burn in other parts of the country, debate rages over the causes of the bush fire outbreak and what steps should be taken to prevent a recurrence. Arson has been blamed, with the NSW Police Force having taken legal action against more than 180 people for bushfire related offences since late last year.

These include the deliberate lighting of bush fires, failure to comply with a total fire ban and discarding a lighted cigarette or match on land. Climate change is considered by many to be the culprit, with Prime Minister Scott Morrison “We will be thinking about what the community needs, our top priorities and what we can afford. ”

Cr Matthews, who censured her fellow Councillors late last year for inappropriate conduct in Council Chambers, said she was “not going to take any nonsense” this year, with political grandstanding likely to be an issue leading up to the September elections.

“We all know games will be played coming up to the election and I’m not going to stand for it, ” she said.

“I’ll be using the rules at my disposal to get the business done. “We have to make good sound decisions. “We have to get it right and I will continue to call out inappropriate behavior. ” Having said that, Cr Matthews said she believed many decisions had been made in Chambers where Councillors had deviated from party lines in casting their votes.

“I believe you have to look at what is before you and make your own decision in the best interests of the community, ” she said. “That’s certainly what I’ll be doing. ” Cr Matthews said she believed many residents were still struggling with the geography of the existing wards.

“I think it’s very confusing. “The wards aren’t evenly distributed and don’t make a lot of sense, ” she said. “The matter is certainly worth a discussion in the next term of Council. ”