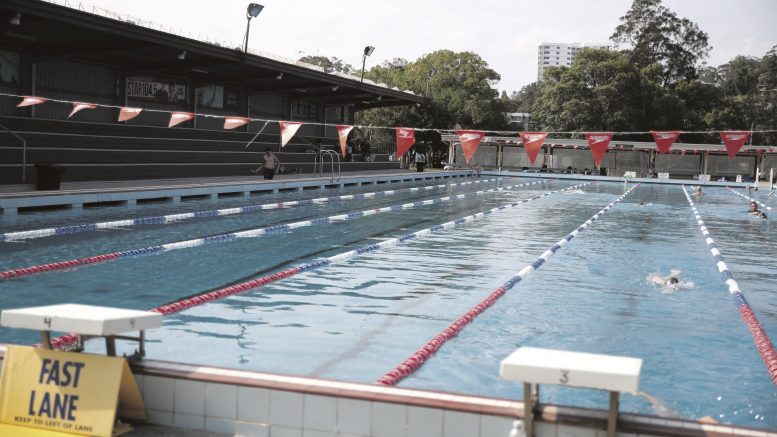 A new swimming complex to replace the timeworn Gosford Olympic Pool will be one of the top projects put forward by the Mayor at a weekend workshop on February 8 and 9, at which councillors and council officers will prioritise funding for various projects in the 20/21 financial year.
“I am looking for a project in every ward to put forward for funding, but heading my list is a new pool for Gosford,” Cr Matthews said.
Gosford Pool first opened to the public in 1955 and although various buildings and facilities have been added piecemeal over the years, there has been no major revamp since.
“The pool has too many bandaids on it for my liking,” Cr Matthews said.
“The pool itself is structurally starting to become unsound.
“There are a lot of issues involved and we need a completely new main pool.

“This would involve closure of the site for some time, but that can’t be helped.

“The community will have to come along for the ride to end up with a state of the art swimming pool complex.
“We should be giving our picturesque waterfront back to the community by enhancing what it’s got, and that includes a huge makeover of the entire pool site.
“What I would like to see is a new Olympic sized pool, a new indoor pool and some sort of swimming oasis for young mums.
“They have a small one now, but let’s make that more exciting.
“Let’s add a play space, perhaps a slide.
“And we need to open up the waterfront to the pool, which means relocating the grandstand to the other side of the complex.
“We want to be able to see Brisbane Water from the pool; my idea would be some sort of glass panelling.
“It’s time to go roaring into the twenties.
“There is a park area at the side of the pool.
“Who knows, some of that could be included to create more spaces for families to come and sit.
“We could make our swimming complex a full-day attraction.”
Cr Matthews said other projects high on her agenda included an expansion of Vera’s water garden at The Entrance, expanded car parking facilities for the region’s town centres and a resolution for traffic problems in Carters Rd, Lake Munmorah.
“I would like to see an expanded water garden at The Entrance, similar to The Esplanade in Cairns, with different pools, something just for babies and something for the older children.
“I would like to see the waterfront become a full-day attraction.
“I’d also like to see tables and chairs put in, maybe a putt putt course as well as interactive water play for the older kids.
“My long-term vision is to see the water garden extended all the way down to Picnic Point, opening up the whole area.
“But we have to start somewhere.
“As for Picnic Point, I’d like to look at how we can create a little beach or something there, along the lines of South Bank in Brisbane.”