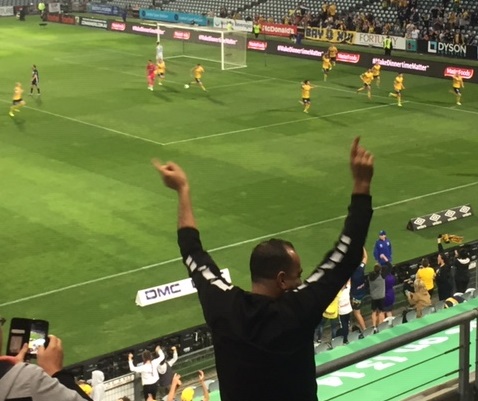 [Central Coast Stadium, Gosford] Rarely do local fans witness such a night of football. Five goals, 4 VAR decisions, biffo, penalties, yellow cards a plenty and a coach expelled from the field. Though at the final whistle the Mariners came out with a memorable win against a highly skilled and indignant Melbourne Victory.

This the Mariners first win against Melbourne Victory in almost seven years.

The victory gave long term fans a taste of the glory days of the club, particularly when veteran striker Matt Simon slotted away the two penalties that sealed the deal for the home team.

Simon, who had racked up his 250th A-league game the week before[local boy made real good] came on in the second half. His two flawlessly executed penalty shots bought up his 50 goal tally for the Mariners.

The first half was a hard fought tussle between the two teams, both of which have failed to bring enough consistency to their season so far.

Victory scores first, 8 minutes into the game as Dobras’ effort is deflected and wrong-foots keeper Birighitti, taking the defence line and the crowd by surprise.

Then at one minute before half time the Mariners turn the momentum around with a classic cross from Lewis finding Jordan Murray, who heads it home for an equaliser.

The second half becomes an arm wrestle between the two teams, both desperate to get the three points and climb the league ladder.

The Mariners are on the front foot and think they have the lead when Kye Rowles scores from a corner seven minutes into the second half, the Mariners cannon rings out. Then, the goal is cancelled shortly after by the Video Assisted Referee (VAR) for offside.

At 63 minutes, local hero Matt Simon is subbed on to replace the hard working Jair. Simon launches straight into action and is felled in the box, though no penalty is given. Milan is given a yellow for protesting too vigorously to the ref.

Now at 78 minutes it is the turn for the visitors to score, as Traore’s cross strikes the post, rebounds off a Mariners defender and goes into the back of the net.

Fortune isn’t flowing the home team’s way and the crowd sense a familiar sinking feeling. Though the home team lifts and increases their intensity.

The Mariners make a second change as Sammy Silvera comes on for Milan Duric. He too launches into the game with a chance, swinging a ball to Lewis who heads it into the path of Danny DeSilva but his volley strikes the side of the net.

Then at 90 minutes there are shouts for handball as Simon falls in the area yet it’s given against the home team and Victory escape with a free-kick. But wait, there’s another VAR decision pending… after a long wait a penalty is given.

Simon takes the penalty and slots it home for an equaliser.

Tempers flare in the Victory camp and shortly after Matt Simon is shirt fronted by Victory’s number 17 mid fielder Elvis Kambosa. A melle ensues as the two are assertively separated by their team mates. In the wash-up, two Victory players are given yellow cards. Shortly after an irate Victory coach Marco Kurz is red carded for leaving his zone and escorted from the ground.

Moments later as the Mariners push forward again, McGlinchey is brought down amidst a group of Victory players and another spot kick is awarded against the visitors.

Simon again moves forward to take it and crashes his effort off the right sided crossbar to give the Mariners the match winning lead of 3,2 and Simon’s 50th goal for the Mariners.

The final whistle blows after what is a very long 4 minutes of extra time and the 4,357 Mariners fans (minus 100 or so Victory supporters) are jumping and high fiving with joy.

The Mariners now turn their attention to the F3 Derby in Newcastle next weekend. Followed by a second game against Western Force on the road.

The next home game is against arch rivals Brisbane Roar on January 25th. A game likely to attract CCM fans of old who may show up ready to watch another game of remarkable football.

Details and tickets at the Central Coast Mariners website

CCN is a media partner of CCM.