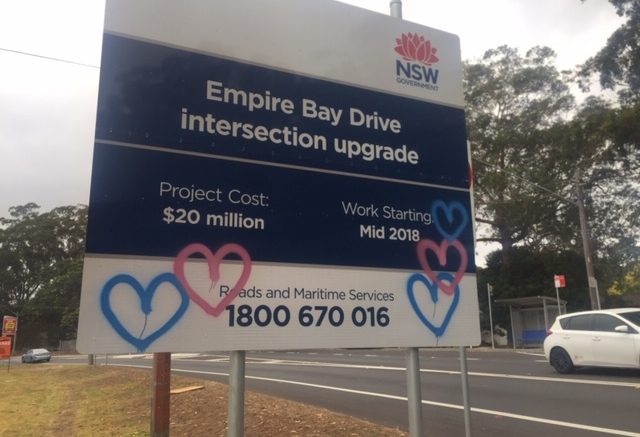 An example of the love heart shaped grafitti flourishing across the Central Coast.

The man allegedly responsible for the flourishing amount of love hearts sprayed onto road signs, power poles and similar across the Central Coast has been refused bail in Gosford Local court on Monday January 6.

The accused, Daniel Bolten, 29 of Budgewoi appeared in court via a video link from Parklea Correctional Centre. He was represented by legal aid in the Gosford courtroom 3.

The weapon in case referred to a set of knuckle dusters allegedly found on Mr Bolten at the time of his arrest. These are classified as a prohibited weapon in NSW.

Mr Bolton’s legal aid lawyer applied for bail, suggesting a series of conditions be attached, including a curfew from 6pm to 6am, a prohibition on spray cans and a twice weekly reporting schedule to Toukley Police Station.

Lawyer for the police opposed bail, fearing re-offending and being a danger to the public.

Magistrate Railton formally refused the bail application and set the new hearing date to February 20. Mr Bolton will remain in remand until that date.

The matter will return to the Gosford local court on Feburay 20, 2020.

Coast Community News previously published details of his arrest, that occurred in the early hours of December 30, at a round-a-bout in Kincumber. [story link here].