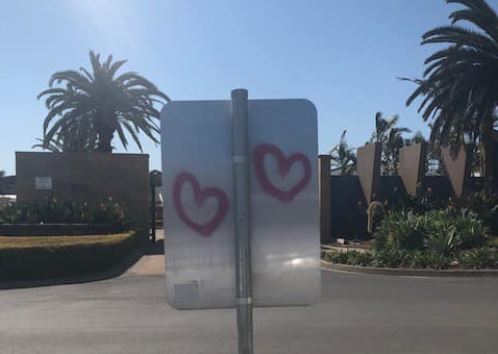 An example of the love heart graffiti on a Central Coast road sign. Image: Police Media

Multi-coloured love hearts have been spray painted on road signs, walls and power poles across the Central Coast in their hundreds over the 18 months.

The police report stated that an unmarked police car spotted the man in the act of spraying a love heart on a street sign in Kincumber in the early hours of the morning. The man was apprehended after a tussle that involved a short foot chase and the use of pepper spray.

Male: 29 old Budgewoi male
Details: For the past 12 months there has been a spate of incidents across the CC where ‘love hearts’ are spray painted on various public structures and roadways.

About 1:10am Monday 30/12 Brisbane Water Police were patrolling in an unmarked police vehicle and when entering the roundabout at Cochrine St & Empire Bay Dr, Kincumber witnessed the POI (person of interest) standing in the roundabout spray painting a red love heart on a street sign.

The POI immediately took off on foot, dropping his spray paint. Police chased the POI before the POI turned towards Police and was subsequently arrested with the use of Capsicum Spray. The POI was searched with a pair of knuckle dusters located on him.