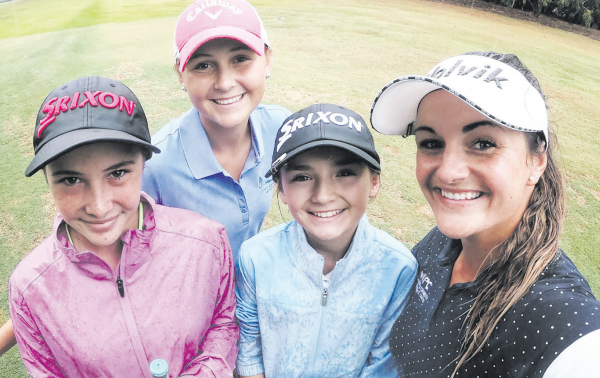 January’s already been a huge month for Central Coast based junior golfers, with competition wins galore and even a special training session with a pro.

The month started with the Harvey Norman Week of Golf Championships, with Toukley Golf Club’s Ann Jang named the scratch runner up for the entire tournament, with a five shot victory in her Under 12’s.
Toukley’s Keegan Phillips was also a standout and was in overall contention throughout the competition, finishing in fourth overall, just behind some of Australia’s elite representatives.
Other top placings included Magenta Shores’ Riley Millers and The Everglades’ Abbi Grimish, who both finished third in the scratch for their divisions.
Magenta Shores’ Michelle Moon was the next local junior to pull out a win when she was crowned Overall Girls’ winner of the Newcastle Junior Classic, a boon for the promising upcomer who had just competed in the gruelling Harvey Norman Week of Golf Championships.
Shelly Beach’s Matt Lamaro then pulled off a back to back victory, crushing the Boys’ Under 15’s in the North Ryde Golf Club competition after taking out his own club’s Top Gun Shootout the day before.
This was followed by the chance of a lifetime for three juniors when they had the chance to train with current Australian Ladies Professional Golf Tour player, Tahnia Ravnjak, who took the three juniors under her wing for some three on one coaching at Concord Golf Club.
Wrapping up local juniors’ achievements for the month so far was Toukley Golf Club’s Annika Boyd, who was ranked eight in the Australian Girls’ Order of Merit, following the South Australian Junior Masters event.
With a jampacked summer of competition still be played, its clear that the Coast is carving a name for itself as a breeding ground for young talent for the sport.