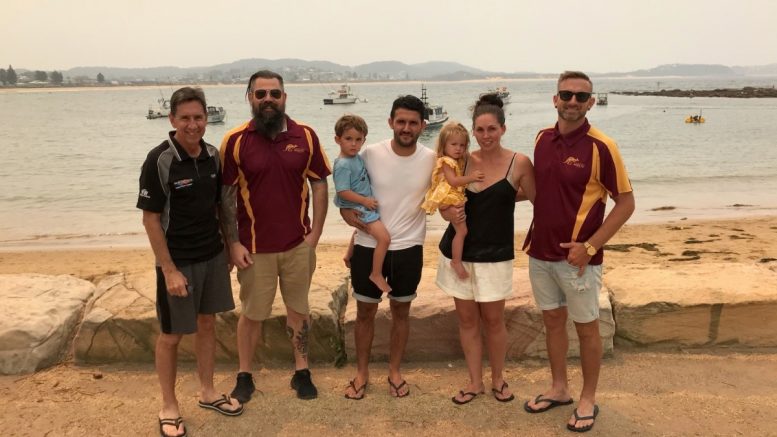 A Saratoga family whose home was severely damaged by fire on December 19, 2019, has received over $13,000 in donations to get back on their feet courtesy of a fundraiser set up by their football club.

Daniel and Jade Dean have both been long term members of the Kincumber Roos Football Club, so when the club’s Executive Committee heard they had lost everything in a house fire six days before Christmas, they launched a Go Fund Me campaign for the couple and their two young children.

Since then, the club and wider Saratoga community has rallied, raising $13,581 for the Dean Family as of January 13, more than double the original $5,000 goal, with more than $10,000 of that total raised in just three days. Club Secretary, Mel Wright, said the Deans were touched by the generosity of their community.

“The out pouring of love and support for Dan, Jade and the kids has been extremely heartwarming,” Wright said. “When the Club first set up this page, it was with the intention of allowing our members the opportunity to support a fellow Roo in need. “Our wish was to ensure enough funds were raised to get Dan, Jade and the Kids sorted in time for Christmas.

“The response from our club members has been phenomenal and really shows what a great family we have within Kincumber Roos, but what was not expected, was the volume of people outside our Club also wanting to contribute. “Support has come from family and friends of the Dean family, the wider football community, residents within Saratoga and neighbouring suburbs and further afield, not to mention the kind ‘silent angels’ who continue to remain anonymous.

“We are pleased to report that Dan, Jade and the Kids have been able to secure emergency accommodation that is fully furnished, and that they have a safe and comfortable to place to sleep. “They are still very overwhelmed by the generosity that has been provided to them and will be forever thankful to the numerous individuals who have offered their help and support emotionally and financially.

“They are extremely humbled by this outpouring of kindness,” Wright said. Shelly Luck, owner of Saratoga based eatery, Shelly’s Café, has also been fundraising for the Deans, collecting all manner of donations when the news broke. Several other businesses in the area have also since donated to the family. The Deans took to social media to express their gratitude to the community and the Club that supported them.

“On behalf of our little family we would like to thank you for making an extremely tough time for our family easier,” Dan said. “We have been totally overwhelmed with the support. “During this tough period we would have struggled to get through without all the help and support that was provided. “Our family will be forever grateful for your support and love,” he added.

The Dean Family fundraiser is still live on the Go Fund Me website for any community members wishing to donate.

Fundraiser was a real mover and shaker