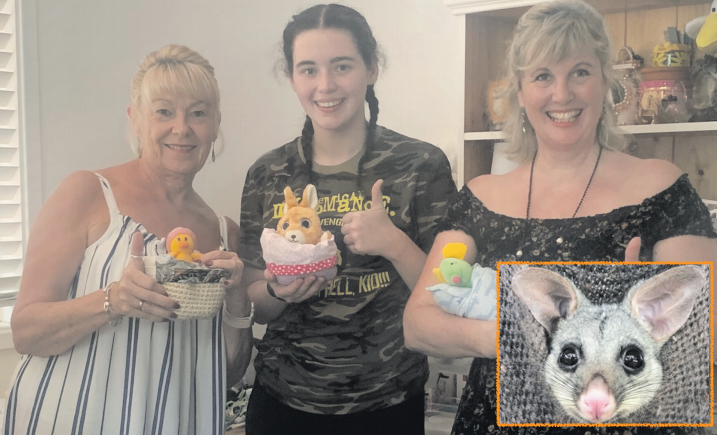 Seamstresses, crafters and makers from across the region have united in a new group doing their utmost to support wildlife carers on the Central Coast.

The Lesa Valpy Craft/Sew for Wildlife Carers Central Coast NSW 2257 group was formed in November, 2019, and in just two short months they’ve produced hundreds of handmade items to support the work of local wildlife carers. Founder, Lesa Valpy, said the group was made up of 63 dedicated women wanting to make a difference.

The group’s popularity exploded after they held two Sewing Bees in Woy Woy earlier this January, but according to Valpy, sewing is just the tip of the iceberg for her team of phenomenal women. Aside from sewing, knitting and crocheting everything from pouches, nests and wraps to custom made glider mittens, the group has been doing everything in their power to support locals who have given up so much to care for injured wildlife this summer.

A longtime member of the Central Coast Women’s Friendship Group, Valpy formed her group with a handful of women with sewing skills and has since watched it grow to 63 members. Not all members can sew though, with others lending support in a plethora of ways, from fundraising to making sure carers have a hot meal to enjoy at the end of a long day.

Valpy said her group was unique in the sense that their focus as a crafting group was solely on supporting the Coast. “While we do take guidance from the Animal Rescue Craft Guild (an Australia-wide community of crafters) we’re different in the fact that everything we do is directly to the benefit of locals,” Valpy said.

Valpy has partnered with Wires Central Coast and Wildlife ARC Central Coast to ensure that every item that members sew, knit and crotchet is contributed directly to carers on the Coast. The same applies to every donation sourced by members, monetary or otherwise. And the team at Lesa Valpy Craft/Sew for Wildlife Carers Central Coast NSW 2257 has been thriving. Since her first Sewing Bee on January 9, Valpy has matched daily calls for assistance and orders of must have items from carers, to members with the right skillset.

Valpy said the generosity, dedication and passion of her team and from supporters had been touching but also galvanizing, with the group now poised to launch several new projects to build upon their existing work. “I have been constantly blown away by the response. “Our wildlife carers have been stretched to breaking point and without them our wildlife wouldn’t stand a chance, so we decided early on that whatever they needed, we’re going to get.

“Seeing so many people take on that challenge, with so much passion and respect, has been beautiful and humbling,” Valpy said.

The two largest of those projects are establishing a donation registry for local carers and holding a fundraising market. “With the registry, we’re going to get a list of must have items together straight from local carers and plan to liaise with pet stores and other businesses around the Coast to show it, with the idea being that customers can look at the registry and then purchase something off the list.

“The business then calls one of our members who will then collect it and deliver it to the designated carer,” Valpy explained. Valpy’s protege, Katelyn Bergan, has been working on getting the registry up and running and said the project would have overarching benefits for the Coast. “We know from our members and donors that people don’t want to just donate cash. “They want to donate something tangible, so they know exactly how they’re helping, and that is what the registry is.

“It will show exactly what’s needed, with donors getting to make the purchase themselves so they know where their donation is going and get an idea about who it is that they’re helping,” she said. The second project is a fundraising crafters market where group members will create a number of items for sale. “We have many talented makers in our group, not just in textiles, but also in the arts, so we think this will be very successful,” Valpy said. All proceeds from the event will be donated to Wires and Wildlife ARC on the Coast.

Valpy said the market currently does not have a set date, with the group now looking for a suitable venue. Another project in the pipeline is ‘Joey bags’ for firefighters. Bergan said group members had been donating bits and pieces of animal rescue items to firefighters over the past few weeks and had since been approached to make special kits for firefighters and volunteers out in the field who come across injured wildlife. The Joey bags, which will contain pouches and other equipment to safely contain an injured animal for transport, will be donated to the RFS NSW.

For any handymen looking to help, Valpy said members had recently been getting partners, family members and male friends involved in their work by having them make nesting boxes, and that donations of this nature would be much appreciated. Sewing sessions are also set to return with a koala themed knitting class to be the first cab off the rank. With a huge 2020 ahead of them, Valpy wanted to thank her members and the community who had supported them so far. Valpy said carers across the Coast were still under the pump and that her group would continue to work to make their lives that little bit easier.

“The Coast has been struggling and the need has been great. “To our local wildlife carers we say a big thank you. “Seeing the generosity of the Central Coast and the invaluable work of our carers has been an honour,” Valpy said.