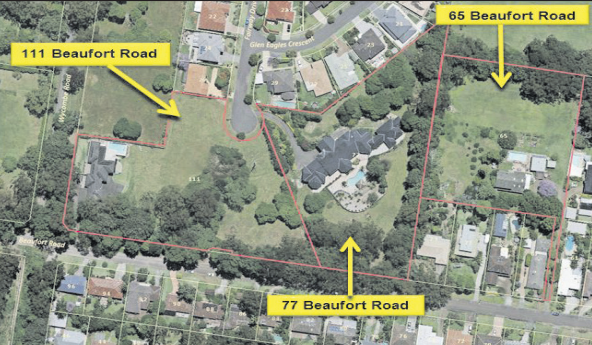 The lots, in Beaufort Rd, are currently zoned 7(c2) Conservation and Scenic Protection

[Terrigal] Central Coast Council has voted to proceed with rezoning three lots of rural land at Terrigal, to pave the way for up to 23 residential blocks, despite receiving 13 objections to the proposal.

The lots, in Beaufort Rd, are currently zoned 7(c2) Conservation and Scenic Protection (Scenic Protection –Rural Small Holdings), but councillors followed the recommendation of officers at the December 9 meeting to rezone them R2 – Low Density Residential.

Major objections raised included concerns regarding traffic and transport, environment and amenity, flooding and drainage, and infrastructure and planning. Resident Rhonda Chapman addressed councillors at a public forum before the meeting, outlining concerns regarding the future of turpentine trees on the sites.

Fellow resident, Therese Gorman, listed the types of birds which use the habitat in the trees and told councillors that the “madness for money has to stop somewhere”. Landowner Gavin Brown spoke in favour of the proposal, saying the lots were the only land available in that area for infill and the proposal was consistent with local planning rules. His colleague, Kellie Hassib, said only one tree would be removed in Beaufort Rd.

Officers recommended the rezone, with additional and expanded requirements for Council to consider when a Development Application (DA) was lodged. These included: management/ ownership arrangements of riparian vegetation; drainage channel design; and servicing, access and footpath connections.

A report to Council said adjoining land to the north, east and south was already zoned R2 and was mostly developed for low density residential purposes. Of 19 submissions, two were in support of the proposal, 13 objected to it and four raised issues for consideration (without objecting or supporting the proposal), the report said.

The report said additional traffic expected from the proposal was well within the capacity of the existing road and footpath network and the network footpaths in Fairway Dr, Glen Eagles Cct and Robertson Ct provide safe level paths from the subject lands to access surrounding areas. “Wycombe Rd has a 45 metre long footway from Beaufort Rd, connecting to a 160 metre long footpath,” it said.

“These works provide improved and safer pedestrian access to Beaufort Rd.” The report said much of the vegetation would be retained onsite in the riparian zone and would come under Council’s management within a future public reserve, as part of the DA process.

It also said of the hollow bearing trees on the site would be retained and the proposal was consistent with the Central Coast Regional Plan 2036 (CCRP) as it: creates housing opportunities which complement residentially zoned and developed lands located adjacent to the north, east and south; does not encroach on sensitive land uses; will protect areas of environmental value and scenic amenity; addresses drainage issues and bushfire planning requirements onsite; maximises the use of existing infrastructure; and, provides a diversity of lot size / housing choice in the residential area.

The proposal was passed unanimously.

An artistic bridge to New Zealand via the Warriors

Locals to volunteer with Performers Without Borders